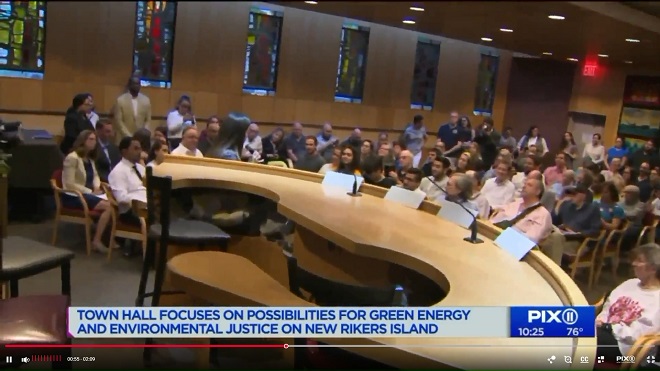 Our Deputy Director & Director of Policy Initiatives Cecil Corbin-Mark spoke at the Renewable Rikers Island Town Hall on June 6, 2019. He suggested turning Rikers Island into a solar farm and training former inmates to help with the installation, creating career paths in the new green economy similar to what WE ACT has been doing with Northern Manhattan residents as part of our Solar Uptown Now program. The move to convert the island jail complex into a solar energy farm along with a worker training program for former inmates is part of WE ACT’s 2019 policy agenda. Corbin-Mark also said: “It’s time to move Rikers Island from being a place of horror to a place of redemption.” While the June 7, 2019 WPIX story on the Renewable Rikers Town Hall only mentioned Corbin-Mark as one of the speakers, the accompanying video does reference his line about redemption as well as our suggestion of putting solar panels on the island. Read the Story & Watch the Video