Next Stop: No Asthma

HARLEM, NY — The New York State Metropolitan Transportation Authority (MTA) today announced the expansion of its electric bus program, showcasing its new electric articulated buses that will be operating on the M60 SBS route traveling south on Broadway from 106th Street and across 125th Street – a major truck route and one of the city’s most heavily trafficked thoroughfares – over to Astoria.

“We celebrate the MTA’s shift to electric buses, and are particularly pleased that they have chosen Harlem’s 125th Street as one of the first routes,” said Cecil Corbin-Mark, Deputy Director & Director of Policy Initiatives at WE ACT for Environmental Justice (WE ACT). “Transportation is New York City’s second largest source of greenhouse gas emissions, and for far too long our community has had to bear a disproportionate amount of air pollution from buses, with six of the MTA’s seven Manhattan bus depots located north of 100th Street. This has had major health impacts for our community, with the six neighborhoods suffering from the highest rates of asthma in Manhattan also being located north of 100th Street. Our Dirty Diesel campaign successfully addressed that by convincing the MTA to switch to clean-fuel buses, retrofit its depots, and abide by the City’s idling laws – all of which helped reduce tailpipe emissions by 95 percent citywide. And now, by starting to shift the fleet from clean-fuel to electric buses, the MTA is going to further reduce greenhouse gas emissions – which should not only help reduce air pollution and lower asthma rates in our community, but will also help reduce our dependency on fossil fuels and address the climate crisis.”

WE ACT launched its “Dirty Diesel” campaign in May 1997 to address the air pollution and asthma rates in Northern Manhattan. This public awareness campaign was instrumental in convincing the MTA to switch to alternative fuel vehicles and invest in pollution control retrofits for its entire bus fleet in 2002.

Corbin-Mark spoke at the MTA’s press conference announcing the move. WE ACT’s Co-Founder & Executive Director Peggy Shepard was also in attendance to celebrate this historic event.

WE ACT for Environmental Justice is a Northern Manhattan membership-based organization whose mission is to build healthy communities by ensuring that people of color and/or low-income residents participate meaningfully in the creation of sound and fair environmental health and protection policies and practices. WE ACT has offices in New York City and Washington, D.C. Visit us at weact.org and follow us on Facebook, Twitter, and Instagram. 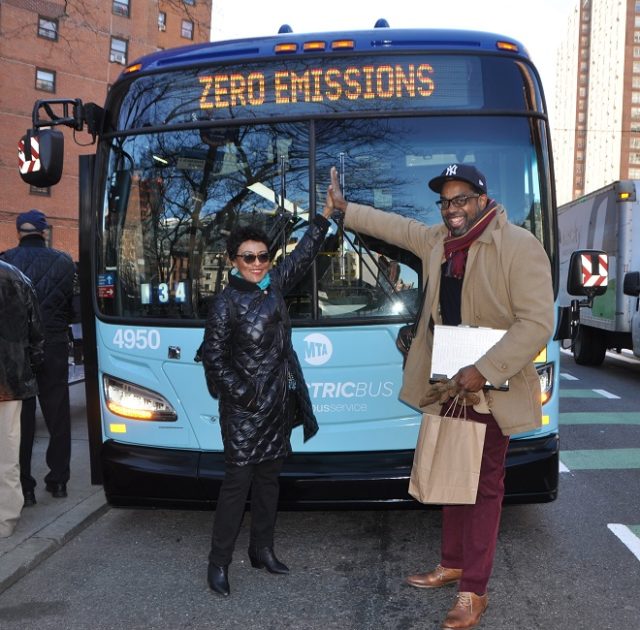