Plan to Train the Formerly Incarcerated to Install the Solar Panels

HARLEM, NY — Cecil Corbin-Mark, Deputy Director & Director of Policy Initiatives at WE ACT for Environmental Justice (WE ACT), and John Hall, a solar installer trained by WE ACT and Solar One who used to teach art on Rikers Island, both testified at a New York City Council hearing today in support of Renewable Rikers, a proposal to convert the island into a solar farm. New York City Mayor Bill de Blasio has already pledged to close Rikers, the nation’s largest penal colony, and City Councilmember Costa Constantinides (District 22) – who chairs the Council’s Environmental Committee, which held the hearing – has proposed three pieces of legislation as part of the Renewable Rikers Act:

Intro 1591: Conduct a feasibility study for constructing a wastewater treatment facility on the island;

Intro 1593: Conduct a feasibility study on constructing renewable energy facilities and battery storage on the island.

Both New York City and New York State have set some of the most ambitious carbon reduction goals in the nation, which will require shifting away from fossil fuels and dramatically increasing renewable energy generation. The closure of Rikers Island presents a unique opportunity to increase renewable energy capacity in New York City, where space limitations have been one of the challenges of large-scale solar installations.

As part of its Solar Uptown Now program, WE ACT and its partners have trained more than 150 unemployed and underemployed residents of Northern Manhattan – including many who have been incarcerated in facilities like Rikers Island – to install solar panels on the roofs of affordable housing throughout the community. The organization hopes to train those formerly incarcerated at Rikers to install the panels on the proposed solar farm there. In addition, this would create an opportunity for some of the trained installers to join WE ACT’s Solar Uptown Now Services (S.U.N.S.) solar cooperative.

“Research has shown that low-income communities and communities of color not only endure a disproportionate level of the health impacts of climate change, but they also face disproportionate rates of incarceration as well,” noted Cecil Corbin-Mark, Deputy Director & Director of Policy Initiatives at WE ACT for Environmental Justice. “Building a solar farm on Rikers would create a large source of renewable energy in the five boroughs while providing some restorative justice as well, and in doing so it can serve as an example of a just transition for the entire world, demonstrating how to address the climate crisis in a just and equitable way.”

“Converting Rikers Island into a solar farm would be a big giveback for those living in our community,” said John Hall, a member of WE ACT for Environmental Justice, a solar installer trained by WE ACT, a member of the S.U.N.S. solar cooperative, and a former art teacher on Rikers Island. “As a solar farm, we would be delivering clean, supplemental power to lower income communities. At the same time, we would be providing jobs and training to the formerly incarcerated citizens.”

WE ACT for Environmental Justice is a Northern Manhattan membership-based organization whose mission is to build healthy communities by ensuring that people of color and/or low-income residents participate meaningfully in the creation of sound and fair environmental health and protection policies and practices. WE ACT has offices in New York City and Washington, D.C. Visit us at weact.org and follow us on Facebook, Twitter, and Instagram. 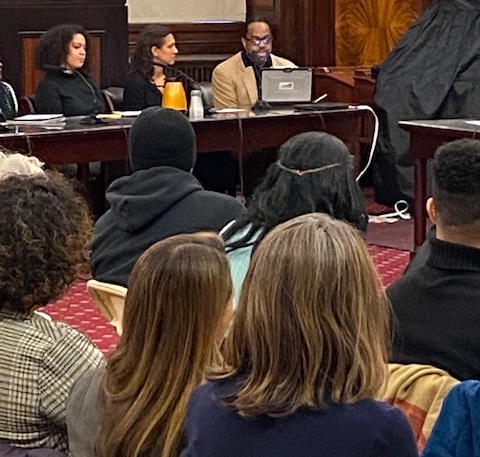 Cecil Corbin-Mark, Deputy Director & Director of Policy Initiatives at WE ACT for Environmental Justice, testifying in support of the Renewable Rikers Act. 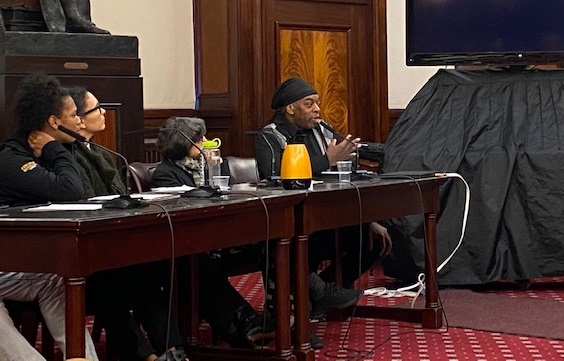 John Hall – a member of WE ACT for Environmental Justice, a solar installer trained by WE ACT, a member of the S.U.N.S. solar cooperative, and a former art teacher on Rikers Island – testifying in support of the Renewable Rikers Act.