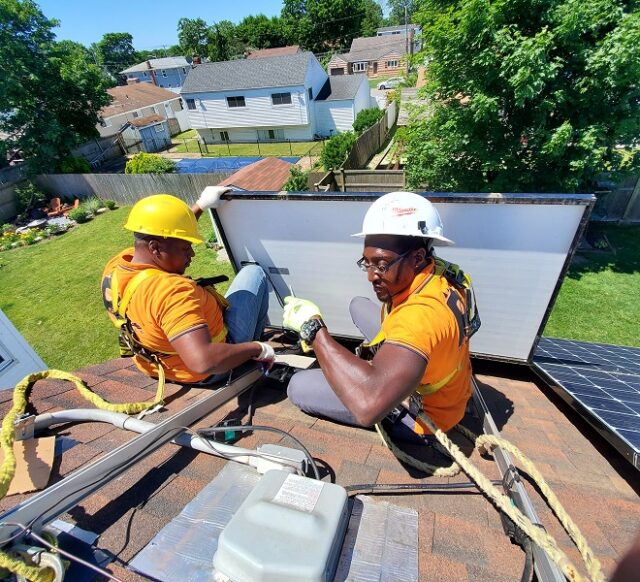 Out of WE ACT’s Solar Uptown Now program, 10 solar workers established a cooperative, fulfilling their ambition to own a stake in the emerging green economy, to create job opportunities for other people of color, and ultimately, to give back to their communities

Since relaunching and expanding its free Worker Training program in 2012, WE ACT for Environmental Justice has trained more than 2,000 Northern Manhattan residents for careers in the construction industry. And with the creation of our Solar Uptown Now program in 2016, we added solar installation to our list of free training programs.

Solar Uptown Now is a partnership with Solar One and the Urban Homesteading Assistance Board to bring solar energy to affordable housing in Northern Manhattan. As of March 2021, the program has installed solar panels on 13 buildings, including 11 Housing Development Fund Corporation (HDFC) cooperatives – which are multi-family affordable housing buildings – in Northern Manhattan, producing 415 KW-DC of renewable energy, avoiding 802 pounds of nitrogen oxide emissions, and saving residents an estimated $61,700 in the first year and an estimated $1.9 million over the 25-year life of the panels.

An essential element of this program, which has been referred to as a “Green New Deal for Harlem,” is the creation of local jobs by training unemployed and underemployed members of the community to do the installations. Six of the more than 100 certified solar installers we trained found jobs, including with the contractor doing the Solar Uptown Now installations – as mandated by their contract. 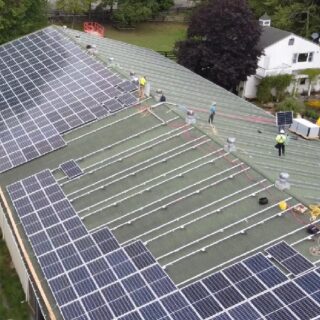 But what about the rest of those trainees? Why has it been hard for our certified solar installers to find entry-level work in the solar industry? And for those fortunate individuals who do find work, why is it a challenge to find long-term employment and build a career in the industry?

The Solar Foundation’s 2019 Diversity Study found that women make up 26 percent of the solar industry. Hispanic and Latinx staff comprise 17 percent of the workforce, Asians 9 percent, and Black people only 8 percent. The study also found that more than 80 percent of executives in the industry are white, and men.

Clearly, the solar industry has a diversity problem. As our Director of Federal Legislative Affairs Kerene Tayloe told E&E News, “the numbers don’t lie.” Tayloe offered recommendations on how solar companies can remedy this, pointing to the Green Jobs Report by WE ACT and the Environmental Justice Leadership Forum. The report, released in December 2020, outlines imperatives, policies, and best practices for bringing underrepresented groups into climate change work and the clean energy economy.

But our certified solar installers – most of whom are Black or Latinx – still need jobs, and they need them now.

Unable – and unwilling – to wait until the solar industry get its act together, our enterprising installers set out to take control of their own destiny, forming a solar workers cooperative.

In 2019, a core group of 10 established Solar Uptown Now Services (SUNS), with the intent of serving as an example of diverse and equitable ownership in the growing green economy while building a foundation for the employment of other certified solar installers – regardless of their race or gender – who follow them through WE ACT’s training program.

“There weren’t too many opportunities out there for us to get jobs,” explained SUNS member James Bailey. He saw the cooperative as an opportunity for its members to avoid the pitfalls of a job search – which was clearly stacked against them – and “create our own work” instead.

WE ACT has served as an incubator for the cooperative, and our Director of Organizing Charles Callaway, who also heads our Worker Training program, led this initiative as well. 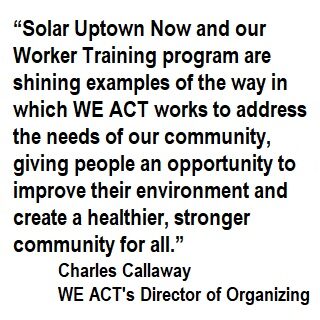 “Solar Uptown Now and our Worker Training program are shining examples of the way in which WE ACT works to address the needs of our community, giving people an opportunity to improve their environment and create a healthier, stronger community for all,” said Callaway. “And the creation of the workers cooperative, Solar Uptown Now Services, was a natural outgrowth of this, seizing on an opportunity to further these goals.”

The SUNS cooperative fills the equity and inclusion gaps within the solar industry, giving people of color the opportunity to not only find employment but also to secure an ownership stake in the emerging green economy.

Already equipped to do the installations, SUNS members attended the Green Worker Cooperatives Co-Op Academy in the Bronx to gain the skills and knowledge they would need to operate an effective cooperative. This included finalizing their business plan, formalizing the co-op as a Limited Liability Corporation, and developing a membership manual.

The motivation to become business owners was one of the driving forces behind the formation of SUNS. According to Andre Gentles, one of the members, “this was a major opportunity for me to get into ownership in general, because I am just used to being an employee, not a business owner.”

SUNS member Shawn Choice, who pursued a career as a solar installer with ownership in mind, said: “If I am going to utilize a service, I want to own it.”

The opportunity for personal and professional growth was also cited as a factor in starting SUNS. Gentles explained that getting the project off the ground helped him develop patience – in respect to the process, his coworkers, and himself. And by coming together for a greater cause, he said, they have bettered themselves.

As part of the formation process, each member gave themselves a strengths, weaknesses, opportunities, and threats (SWOT) analysis to identify their entrepreneurial advantages and limitations. SUN member Percy Prempeh-Mann found the self-reflection helpful, and noted “Wherever one person struggled, others were always willing to step in and help.” In this way, the cooperative was not only beneficial to individual development, but also fostered teamwork.

That teamwork has gone a long way in the co-op’s initial projects – which have employed more than 17 community members. 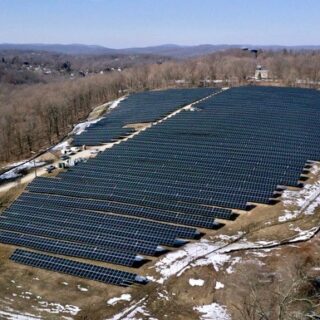 As of early 2021, SUNS members completed two solar installation projects in upstate New York: the first was a 250 KW installation on a barn in Arcadia, and the second was a ground mount 4 MW system made up of 10,000 solar panels on a 9-acre field in partnership with Croton Energy Group, Inc.

Currently, SUNS is scheduled to complete an 80 KW project in Northern Manhattan by the end of Spring 2021. You can follow the progress of this and other projects on the SUNS Instagram page.

Ultimately, what motivates members’ passion for the work is their ability to give back to their community. For example, by establishing SUNS, they are creating job opportunities for other people of color who come through WE ACT’s training program – an advantage they were never given.

In addition to the jobs, members also cited the importance of increasing the use of solar energy to help reduce air pollution and greenhouse gases. A study found that air pollution contributed to at least 2,700 premature deaths annually in New York City, and studies show that people of color are suffering a disproportionate impact. Air pollution also proved to be a key factor in COVID-19 mortality rates, which we know impacts communities of color disproportionately.

Similarly, reducing greenhouse gases is viewed as critical by SUNS members because the impacts of climate change, such as deadly heatwaves, also disproportionately effect communities of color – like those in Northern Manhattan. And not only does solar energy reduce the need for burning fossil fuels, which emits those greenhouse gases, but it also saves users money on their electric bills, addressing the need for greater energy security in these communities.

“This is one of the things that I aspire to, the opportunity to make my community the best place to live,” said Callaway. Gentles agreed, adding the importance of “greening” the community and “replenishing what we deplete.” 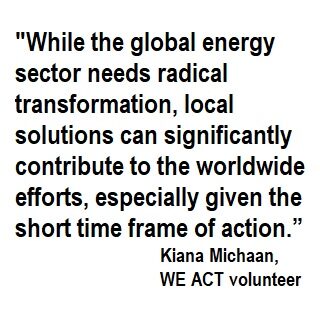 Kiana Michaan, former WE ACT volunteer, emphasized the need to act quickly when it comes to mitigating climate change and injustices. Adding that “while the global energy sector needs radical transformation, local solutions can significantly contribute to the worldwide efforts, especially given the short time frame of action.”

She also hopes that SUNS will serve as a template and catalyst for other solar cooperatives serving low-income communities and communities of color, providing a pathway for sustainable ownership in the emerging green economy.

With President Biden’s commitment to giving 40 percent of his investment in clean energy to low-income communities of color – including to training and workforce development – there could be sunny days ahead for SUNS and other co-ops like it.