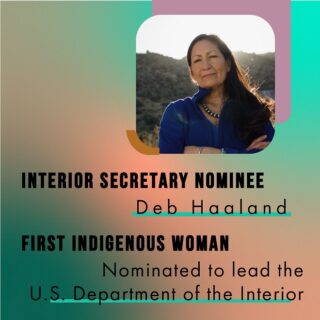 Rep. Deb Haaland is up for a historic confirmation hearing as the first Native American to serve as Secretary of the Interior. She would also be the first ever Native American cabinet secretary. So, what does this historic nomination mean for environmental justice?

Haaland’s track record
Much of America’s long history of violence toward Indigenous communities has stemmed from policies and practices that fall under the Department of Interior’s (DOI) purview. Responsible for managing 500 million acres of shared public lands, the DOI is responsible for upholding the Federal government’s treaty and trust responsibilities to Native American tribes. Dedicating her life to building relationships with Tribes and advocating for their rights, Haaland’s confirmation would ensure Native American and Indigenous voices are elevated and can serve as a driving force for the protection of our land, water and wildlife.

Since her time in Congress, Rep. Haaland has been one of the strongest voices for marginalized communities and environmental justice priorities. For example, Rep. Haaland has introduced a bill requiring the Secretaries of Interior and Agriculture to conduct interagency environmental justice reporting on the effects of their permitting activities as well as legislation that will increase access to public lands for all communities and fights for environmental injustice. Rep. Haaland also introduced a $100 billion proposal to combat legacy pollution and to prohibit grants that permit pollution in vulnerable communities where poor air quality issues have persisted for decades.

Haaland’s priorities
Rep. Haaland has always been an advocate for communities “historically most neglected by the government”. As Secretary of the Interior, Haaland has made it clear that climate and environmental justice will be at the forefront of DOI actions as we work to undo previous Administration, which disproportionately impacted communities of color, Indigenous Peoples, and low wealth areas. If Haaland’s history serves as an example of what we can expect from her as Secretary, we will see an increased focus on land, air, and water quality in our most impacted and vulnerable communities.

Haaland’s plan
In Rep. Haaland’s confirmation remarks, she stated the following as her focus:

“If confirmed, I will work my heart out for everyone:
the families of fossil fuel workers who help build our country,
ranchers and farmers who care deeply for their lands,
communities with legacies of toxic pollution, people of color whose
stories deserve to be heard, and those who want jobs in the future.”

WE ACT for Environmental Justice hopes to see all agencies and departments, including DOI, take the extra effort needed to reverse the actions of the Trump Administration as well as the return of decision making that is supported by sound climate and environmental science. As the new Secretary of the Interior, Rep. Haaland has promised to be a fierce voice for the planet and our protected land.

With this confirmation, WE ACT looks forward to working in tandem with Rep. Haaland and the Department of Interior.

Alexandra Grayson is a Legislative Intern and Abigail Sheppard is a Communications Intern with WE ACT for Environmental Justice. Both are based in the Federal Policy Office.