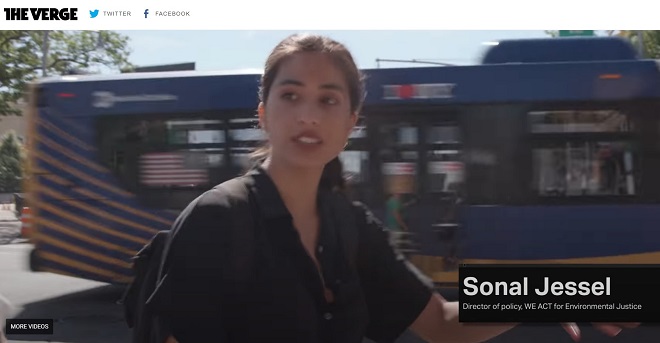 When the Verge approached us to learn more about the Urban Heat Island effect, WE ACT for Environmental Justice’s Director of Policy and resident heat expert Sonal Jessel, M.P.H. took journalist Justine Calma and her film crew on our East Harlem Heat Tour, which showcases how this environmental justice community is being disproportionately impacted by climate change. According to a 2019 New York City Department of Parks and Recreation and Mayor’s Office of Resiliency report, the average surface temperature in East Harlem in August is over two degrees higher than that of the city overall. And much of the neighborhood is in a coastal floodplain, particularly south of 110th Street and east of Second Avenue to the north. The video and story, which discovered even greater heat inequities, were shared on the Verge on July 14, 2021. Watch the Video & Read the Story