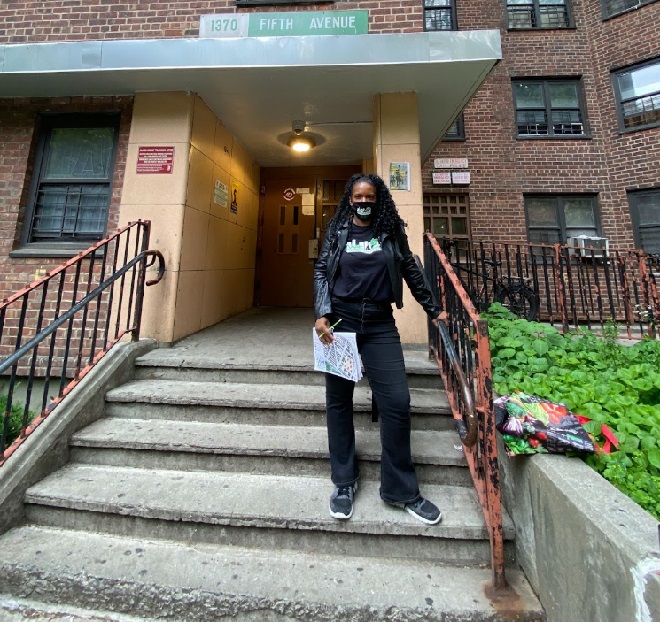 In recent years voter engagement has become a high-priority program for many advocacy groups, including WE ACT for Environmental Justice, signaling a desire to defend democracy, and to send a message to elected officials that constituencies are motivated and that they demand positive policy change that benefits their communities. Voter engagement is also a means of bringing awareness to important problems that communities face.

WE ACT hired Pamela Stewart-Martinez to lead its voter engagement program, with the objective of mobilizing and engaging New York City Housing Authority (NYCHA) residents to impact change in response to The Blueprint for Change, a policy that many NYCHA residents and housing advocates believe poses a threat to the future of affordable public housing.

NYCHA represents a potentially powerful voting bloc: as the biggest public housing authority in the country, it comprises more than 500,000 residents. While WE ACT has always been attentive to NYCHA residents’ problems, given that they make up 20 percent of the WE ACT membership, the uncommonly large number of positions open for elections in the 2021 New York City Primaries was a unique opportunity for NYCHA residents to voice their concerns.

When it comes to mobilizing NYCHA residents, Stewart-Martinez sees herself as a motivator.

“My role is to help people see hope in politics, to show them how powerful they truly are,” she says.

It starts with picking up the phone, making calls and listening. In the first seven months, Martinez made calls to voters across Northern Manhattan and heard about their concerns. As part of this canvassing, Pamela reached out to Albert Hubbard, a 62-year-old resident of Wagner House in East Harlem. He appreciated the reminder to vote in the Primaries because he is concerned about the youth in his neighborhood, police-community relations, and public education.

Hubbard believes if NYCHA residents – especially young folks – want to see change, they need to do their research and vote conscientiously. He doesn’t see that happening as much as he’d like. He was proud to exercise his vote in the June Primaries.

“If you don’t vote, your voice is not heard,” says Hubbard. “Dr. Martin Luther King, Jr. gave his life up for Black people to vote. I think about that.”

Listening to NYCHA residents helped the WE ACT team develop pamphlets and FAQ (Frequently Asked Questions) based on common questions they were getting around ranked choice voting, candidates, and The Blueprint for Change.

The controversial proposal, first introduced in July 2020, would significantly restructure NYCHA. According to the NYCHA website, The Blueprint for Change proposes transferring 110,000 apartments to a newly created public entity and the remaining 62,000 other apartments be managed through a PACT/RAD initiative, a public-private partnership. NYCHA states this setup would enable major renovations and repairs to be made faster and more reliably.

Tenant activist groups like Fight for NYCHA oppose The Blueprint for Change because they believe it implies a privatization of public housing that will ultimately harm residents. They are most concerned with “project-based” vouchers that are attached to the apartment, rather than the tenant. In this arrangement, there is concern that the tenant may risk being fully displaced if they leave their apartment for a necessary renovation; activists point to this displacement happening in Puerto Rico which has fully adopted the PACT/RAD initiative.

Tenants also felt there were not sufficient opportunities to give their input as the proposal was being developed.

“It is important for residents to understand how the Blueprint might impact their lives, and get a sense for which candidates would listen to these very concerns and do something about it,” says Stewart-Martinez.

WE ACT held nonpartisan candidate forums that were open to Northern Manhattan residents and members –– creating a space to be able to ask candidates directly about issues affecting their community, including their positions on The Blueprint for Change.

The week before the Primary Election, WE ACT volunteers hit the pavement and canvassed 14 NYCHA developments in Northern Manhattan. They knocked on doors, started conversations, answered questions, and left behind pamphlets.

“We really got down into it,” says Keya Dutta, former WE ACT intern, who reached about 50 people a day in that week. “Some people shut the door in our faces, but others were very eager and thankful to hear who we thought they should vote for and why.”

“I think voters, especially NYCHA residents, need to know who stands up for their beliefs because their whole housing and shelter is at the discretion of the government,” says Dutta.

The work is personally meaningful to her. “It felt really good to give pamphlets to my friends to put in and around their developments. For extra measure.”

The work paid off. WE ACT registered 369 voters and exceeded the number of new and sporadic voters to 1,252 people who pledged to vote in the Primary Election. On the Primary Election Day, WE ACT contacted 876 of the targeted voters by phone, text, or at their doors and 400 of those voters were confirmed to have voted by Voting Access Network (VAN).

Leading up to the General Election, Stewart Martinez and a team of dedicated canvassers conducted phone outreach to newly registered and sporadic voters in Northern Manhattan to confirm their plans to vote. In total, 1,487 confirmed they were going to vote.

Educating the public is also central to voter engagement — WE ACT hosted workshops on the ballot referendums and redistricting, helping translate nuanced policies and processes that help people prepare to vote on Election Day, but also be active civic participants.

While we wait for the final General Election numbers from VAN, WE ACT will continue to focus on civic engagement and education opportunities for the community.

“We are hoping to build a lot of power through knowledge,” says Stewart Martinez. “We want our membership to know who represents them, what their roles are, and what kinds of questions to ask at candidate forums. We also want them to understand how propositions affect them and their communities. We want them to be active participants and that is an ongoing process that continues beyond Elections.”

The next workshop will be on Tuesday, February 1 at 7:00 PM. Part of our 2022 Civic Engagement Political Series, it will focus on the roles and responsibilities of your political party, from executive board members to elected officials.

We are also gearing up for our 2022 Candidates Forums, in conjunction with WE ACT 4 Change, with the following tentatively scheduled:

May 14 – Candidates Forum for New York State Governor, Lt. Governor, & Attorney General (as part of our May Membership Meeting)

We will provide links to register for these events once they are available.

Justine Lee, a member of WE ACT’s Advisory Committee, is the Executive Director of Living Room Conversations and Co-Creator of Make America Dinner Again.