Preface: This piece was first written before the release of the Inflation Reduction Act and therefore does not comment on the merits of this proposed legislation relative to gas prices. 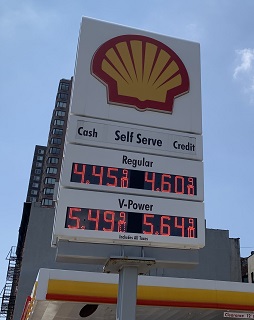 Gasoline[1] prices across the country have risen at unprecedented rates. From January to June, prices at the pump shot up by 50 percent to a record-breaking $5 per gallon, creating ripple effects across a range of consumer goods and contributing to the highest nationwide inflation in 40 years. While the cost of oil has dropped suddenly over the past couple weeks with gasoline following closely behind, experts acknowledge that there is no predicting where prices will go next.

This post aims to answer pressing questions on the nature of this economic mess and what Congress and the Biden-Harris administration must do to fix it.

What Are the Root Causes of Recent Record-Breaking Prices?
Behind these dramatic cost hikes lie three global tragedies: the pandemic, the Russian invasion of Ukraine, and the climate crisis.

When the COVID-19 pandemic hit the U.S. in 2020, the accompanying recession and sharp drop in oil demand caused gasoline prices to crash. Refineries subsequently closed and remain offline to this day – there were five fewer U.S. refineries at the beginning of this year compared to 2020, and domestic refining capacity has decreased by around a million barrels per day. Two additional refineries were shut down after facility explosions in Philadelphia and damage from Hurricane Ida in Louisiana. The retirement of this many refineries substantially limited domestic production of refined oil, limits which remained ‘unnoticed’ during the pandemic due to low demand. Other oil-producing countries also reduced production during these months. However, as pandemic restrictions lifted, demand began to rebound along with prices.

As gasoline prices began to rise, Russia, the third-highest oil-producing country, invaded Ukraine. Sanctions from many countries followed soon after, preventing both the purchase of Russian oil and Russian exports of refined oil. While the U.S. has never relied heavily on Russian petroleum imports, European reliance and subsequent restrictions on Russian oil have caused prices around the world to shoot up, with domestic consequences. U.S. refineries additionally increased already-record liquified natural gas (LNG) exports to Europe in search of higher prices and ever-greater profit. This has exacerbated rising costs nationwide and likely worsened health and environmental burdens for overburdened environmental justice communities living near export terminals.

Pandemic scarcity and the consequences of Russian sanctions have caught the U.S. in a delicate time of transition as the country begins moving from fossil fuels to a clean energy economy. Growing recognition of the climate crisis has marked fossil fuels as a “declining industry” (1, 2, 3, 4) of “stranded assets” (1, 2, 3), and petroleum companies therefore see little value in expanding fossil fuel infrastructure (e.g. reopening refineries). This lack of motivation is coupled with the fact that record-breaking prices have made fossil fuel companies and refineries windfall profits, which are in turn used to buy back their stock, raise share prices, and generate money for their investors (1, 2) (i.e. price gouging). Any substantive increase in production would lower prices and decrease profits, a move that the petroleum sector is unlikely to make.[2]

Instead of publicly acknowledging their private assessment of a doomed industry, fossil fuel companies have blamed the spike in prices on the Biden-Harris administration’s climate agenda. This inaccurate argument (repeated by Senate Republicans and affiliated news outlets) (1, 2) is meant to distract from the fact that petroleum companies are at fault for exploiting an unstable energy market.

Who is Most Impacted by Spiking Gasoline Prices?
As a result, the ‘average’ American household is expected to spend hundreds of dollars more on gasoline (1, 2) and almost a thousand more on heating oil this year. High electricity costs from oil and natural gas pose a special threat during summer months, when the need for air conditioning, fans, and other indoor temperature regulators is critical. In New York, for example, there are about 360 heat-related deaths every year, with “heat-exacerbated mortality” unequally impacting Black[3] and low-income New Yorkers who are at the frontlines of global warming. The city’s utility debt crisis and associated high energy burdens, placed unjustly upon people of color and low-income people, compound this danger.

Not only is the situation dire in the short term, but restricting other purchases to save money for gasoline has long-term consequences that can induce a recession. This, coupled with the current inflation crisis, most alarmingly impacts low-income folks whose disposable income is cut by greater percentages from wide-ranging price increases. Low-income households are disproportionately of color, meaning the effects of spiking prices are felt unevenly along racial lines; as with all disasters, the fallout further burdens disadvantaged people and their communities.

To tie this full circle: Environmental justice communities, composed of low-income folks and people of color, have the distinction of being both highly impacted by the volatile fossil fuel market and most at-risk from fossil fuel-caused climate change.

What Has the Biden-Harris Administration Done?
In response to the jump in gasoline prices, President Biden has called on Congress to pass a federal gas tax holiday and for states to approve similar relief. This alone would only decrease prices by 3.6% and, in the unlikely event of total cooperation by the gasoline industry, would only chop one dollar off a gallon. Combined with President Biden’s championing of biofuels,[4] it could also adversely affect air quality by encouraging a surge in driving; however, Congress is not expected to authorize such assistance even along party lines (1, 2). This effort by the Biden-Harris administration clearly has little real-world positive impact.

President Biden has also attempted to lower prices by increasing the supply of crude and refined oil. Along with recently tapping into the U.S. strategic oil reserve and intensifying ethanol blending (both of which proved unsuccessful), he brought oil executives to a meeting with Energy Secretary Jennifer Granholm in June to discuss possible supply boosts. While both the administration and the fossil fuel industry agree that increasing crude oil refinery capacity is the most effective stopgap, the White House is pushing for the fossil fuel industry to invest in building capacity instead of buying their own stock to benefit investors. The president has additionally made personal appeals to the fossil fuel industry to lower their profits in service to consumers (1, 2). It is, however, unheard of for any petroleum company to cut back on profits for the good of the public.

How Are Lawmakers Trying to Fix This? 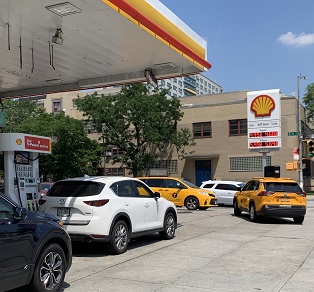 Fossil fuel companies are unlikely to heed President Biden’s appeals for increased production given such high profits. One alternative proposed by lawmakers is to simply expand LNG exports to stabilize global petroleum prices. However, that would only lock in international dependence on this climate-changing fuel and intensify (1, 2) the harmful environmental and health impacts, including increased rates of asthma, cancer, and heart issues, that various environmental justice communities face[5] from fossil fuel infrastructure. The U.S. does not even have the built capacity for that expansion, and LNG exports exacerbate rising domestic costs by decreasing the country’s supply.[6] Instead (as requested by numerous environmental justice organizations including WE ACT for Environmental Justice), the federal government should restrict new and expanded LNG exports to remedy associated environmental injustices and to compensate for the domestic shortage in refineries. Supply of this refined fossil fuel could then approach demand, steadying gasoline prices.

Other suggested fixes for the federal government are to enact a “windfall profits tax” on fossil fuel companies; to set price controls on the market; or to use the Defense Production Act to force an increase in refinery output. Lawmakers have additionally proposed a suite of bills to limit the profits reaped by fossil fuel companies. Out of these, the Stop Gas Price Gouging Tax and Rebate Act (H.R.7099) and the Price Gouging Prevention Act of 2022 (H.R.7736) have the greatest chances of being passed, but progress is rare in a divided Congress. Crucially, none of these address the base cause of fluctuating costs – the inherently erratic nature of the fossil fuel market.

What Else Should the Government Be Doing?
The strongest solution is for the Biden-Harris administration to commit to a swift and just clean energy transition while reducing energy costs for low-income Americans. As said by the International Energy Agency’s Executive Director Fatih Birol: “‘A massive surge in investment to accelerate clean energy transitions is the only lasting solution.’” In addition to the environmental and health benefits of ending petroleum use and electrifying the U.S., electricity markets are inherently smaller-scale and not directly subject to international economic pressures. Renewable energy prices are also more stable than petroleum prices because costs are largely infrastructural, the sources (e.g. sun, wind) are free, and the energy supply is equal to or even more reliable (1, 2) than that of fossil fuels. The development of clean energy grids nationwide would ensure energy security and stability by decoupling the U.S. from global petroleum markets. Therefore, instead of approving new petroleum drilling projects and pushing for greater oil production, the Biden-Harris administration should be doubling down[7] on its stated commitment to a rapid clean energy transition.

Though renewable energy is cheaper than fossil fuels, energy prices will likely remain high in the short term as the electrical grid is transformed. Federal initiatives like the Low Income Home Energy Assistance Program (LIHEAP) can help mitigate the economic strain of such an energy transition by covering related costs. In a recent positive step, the House Subcommittee on Labor/Health and Human Services/Education Appropriations recently increased the program’s funding from $3.8 to $4 billion for the 2023 fiscal year (1, 2). If the federal government can continue to strengthen its energy assistance program by passing the Heating and Cooling Relief Act (and perhaps by taking money from oil and gas subsidies), it will ensure that the inevitable move to clean energy will be beneficial to all.

Environmental justice communities at the frontlines of both fluctuating gasoline prices and fossil fuel-caused climate change must be prioritized in these efforts. A concerted federal push to renewables would mitigate the health impacts from petroleum plants and infrastructure that disproportionately affect these communities. Targeted investments through Justice40-aligned clean energy infrastructure and bolstered programs such as LIHEAP would alleviate unjust energy burdens today and in the future, which is why WE ACT has been advocating for these measures. By fighting climate change, the government can protect the U.S. from volatile gasoline prices and work to address racial, economic, and environmental injustices.

[1] Gasoline/’gas’ is a refined petroleum product produced “from crude oil and other petroleum liquids.” Though it is often referred to as ‘gas,’ it should not be confused with natural gas.

[2] While Exxon Mobil and Chevron are increasing production, they are also dedicating resources to buying up stock and will avoid any actions that could lower their profits.

[3] Black New Yorkers are more than twice as likely to die from heat stress than white residents. This disparity is caused by historic and present systemic racism embedded in the “economic, educational, healthcare, housing, and other systems” that marginalize people of color.

[4] While biofuel combustion emits fewer pollutants than combustion of gasoline, it does not lower harmful NOx emissions. The president’s advocacy for this fuel distracts from the other alternative to gasoline-powered vehicles: electric cars and trucks that release zero emissions.

[5] For example, as of 2020, the country’s 17 authorized LNG terminal proposals were sited within three miles of communities that were collectively almost 40% low-income and/or of color.

[6] The idea that, as a net exporter of petroleum, the U.S. remains unaffected by global energy market shocks is plainly contradicted by recent events.

[7] Since this blog was first written, the White House has announced “Six New Actions” that promote solar energy and clean energy jobs in an effort to lower electricity prices for low-income people. While these steps are a good start, further action in this direction is needed to reduce and stabilize prices; the administration clearly recognizes the benefits of a clean energy economy and should act accordingly. 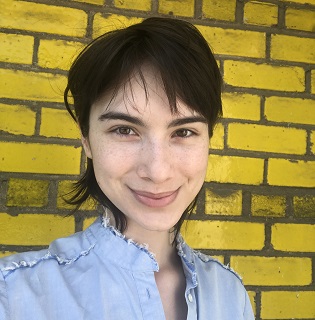 Madeleine Zaritsky is an Energy and Transportation Intern at WE ACT for Environmental Justice’s Federal Policy Office.