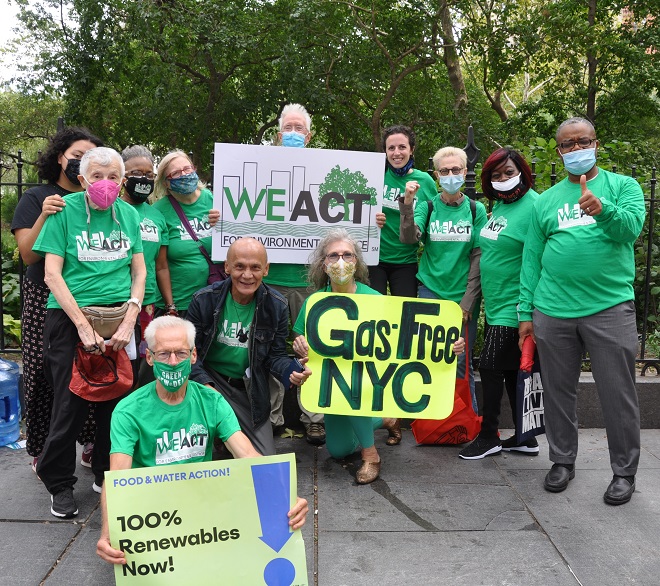 Seventy-one percent of New York City’s greenhouse gas emissions, the air pollution that causes climate change, come from buildings burning fossil fuels like natural gas. And studies have found that air pollution from these buildings leads to nearly 2,000 premature deaths each year across New York State. Studies also show that both air pollution and climate change disproportionately impact low-income communities and communities of color, which is why decarbonization – transitioning away from the use of fossil fuels – is critical to advance environmental justice.

In addition to the outdoor air pollution, the use of natural gas for cooking produces extremely harmful indoor air pollution as well. Studies have found that children living in homes with gas stoves are up to 42 percent more likely to develop a respiratory illness like asthma.

How do we decarbonize New York City’s buildings? We start by not constructing any more buildings that use fossil fuels. Cities such as San Francisco, Seattle, and San Jose have already done this. And there are a number of all-electric buildings being built here in New York City. These buildings rely on electric heat pumps for heating and cooling and induction stoves and electric ovens for cooking.

To achieve this, WE ACT joined forces with New York Communities for Change, New York Public Interest Research Group, and Food and Water Watch to develop legislation, Intro 2317 (also known as Gas Free NYC), that will put an end to gas hookups in new construction and gut renovations in New York City. Councilmember Alicka Ampry-Samuel of Brooklyn agreed to sponsor the legislation, which – after a hard-fought campaign – was passed by the New York City Council on December 15, 2021 (40 for, 7 against, and 1 abstention). Mayor Bill Del Blasio signed it into law, Local Law 54, on December 22, 2021 (watch the video below).

This law is a significant first step in decarbonizing New York City’s building sector, which will reduce air pollution as well as greenhouse gas emissions. Most new buildings under seven stories will be required to be all-electric beginning in December 2023 and those over seven stories beginning in July 2027.

The next challenges include scaling up renewable energy resources – which we have already been doing with our Solar Uptown Now and Community Power projects, as well as our solar workers cooperative – to meet the increased demand for electricity. We have also been working to pass equitable energy efficiency legislation at the state level, to help reduce that demand. And with our Out of Gas, In with Justice pilot project, we’re exploring both the challenges and impacts of switching from gas stoves to election induction stoves in affordable housing. In addition, we are working on addressing energy affordability, to ensure that low-income communities and communities of color – who already spend a disproportionate amount of their household income on energy – can take full advantage of decarbonization and electrification, renewable energy, and energy efficiency initiatives.