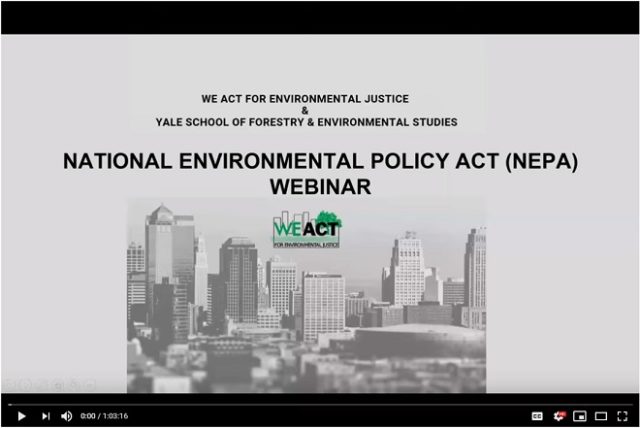 Listen to our webinar to learn how to use NEPA to improve projects happening in your community.

What is NEPA, and Why Should You Care?

NEPA is an acronym for the National Environmental Policy Act. Signed into law in 1970, it requires federal agencies to study and analyze the environmental effects of proposed plans prior to making decisions on whether or not to proceed with them.

Before NEPA, federal agencies did not have to even consider the environmental impacts of their actions. After NEPA, these agencies, in cooperation with state and local governments, must use all practical resources to create conditions in which “man and nature can exist in productive harmony.”

Specifically, NEPA requires all federal agencies to prepare detailed Environmental Assessments and Environmental Impact Statements for projects and actions they undertake. The purpose of the law is two-fold, ensuring that the government does due diligence in determining the full extent of any potential impacts a proposed project may have on the environment and surrounding communities as well as ensuring that those communities are aware of any such potential impacts and have a voice in whether and how they are implemented.

By publishing these studies, as is required by NEPA, the public can not only gain a better understanding of the environmental impacts of a given project, but they can also respond accordingly. Again, this is critical because the law ensures that both the time and effort are taken to investigate and understand the environmental impacts as well as provides an opportunity for the public to meaningfully participate in the process.

NEPA also established a Council on Environmental Quality (CEQ), which is required to monitor all federal agencies and ensure that they are adhering to the legislation.

To learn more about NEPA, read this NEPA Alert.

Why Does NEPA Need Protection?

The Trump administration is seeking to “streamline” and “expedite” the NEPA process, tipping the scale in favor of developers instead of the people. There are three major changes being proposed:

While it’s true that the current NEPA process can be lengthy, that is actually a good thing. It ensures that projects are analyzed thoroughly, because the environmental impacts of poorly conceived projects can cause damage that lasts for decades – and even put lives at risk. The Trump administration and others may not always like the outcome of the process, which gives the public fair chance to participate in the discussion, but these proposed changes will limit the public’s ability to participate in the process while making it much easier for developers to avoid protecting the health and well-being of the communities affected by their projects.

To learn more about the proposed changes to NEPA, read this fact sheet.

What Can You Do to Help Protect NEPA?

Given all the ways in which the Trump administration has been working to undermine environmental policies, procedures, and safeguards in an apparent effort to put corporate profits ahead of public safety and interest, it’s not surprising that these proposed changes to NEPA haven’t received widespread public attention. But NEPA has become a mainstay of the environmental movement and an essential tool for safeguarding our environment as well as the public’s health and well-being.

There are a number of things you can do to help protect NEPA. For starters, you can share this information with family, friends, and colleagues. The purpose of NEPA is to inform the public, so it’s only natural that informing the public is an important first step in safeguarding this legislation.

But the most important thing you can do is submit written comments detailing your opposition to the proposed changes to NEPA. The deadline for doing this is March 10, 2020.

Follow this link to learn about the proposed changes. You can see examples of how to structure written testimony here and here (PDFs). And this guide may also be helpful in preparing your comments (PDF). It’s important to note that you should put your concerns into your own words, as using similar language to that used in these examples could result in comments being lumped together (they will be using software to weed out what they feel are repetitive comments).

To submit comments, you can either do so on your own, via this link, or email them to kerene@weact.org if you would like them to be submitted with WE ACT. You can also send them via mail to:

Citizen’s Guide to NEPA (in both English & Spanish)

WE ACT’s NEPA Alert #2: What is Changing