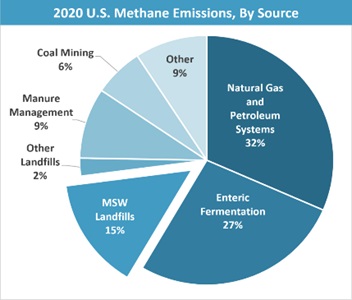 New York City is considered one of the most wasteful cities in the country. New York City sends more than 14 million tons of trash to landfills every year, nearly 10 percent of the nation’s total waste. According to the Environmental Protection Agency, municipal solid waste landfills were responsible for 15 percent of total methane emissions in 2020. Methane is a potent greenhouse gas that is contributing to increasing temperatures and climate change. New York City sends its trash to upstate New York, New Jersey, Pennsylvania, and even South Carolina and Ohio for processing. Landfills and waste processing sites including waste incinerators and burn facilities are more frequently located in environmental justice communities and produce high rates of harmful pollutants that lead to respiratory illnesses and cardiovascular diseases.

New York City recycles only 20 percent of its waste despite 68 percent of waste in landfills is considered recyclable. Food percent of materials found in municipal solid waste landfills (more than 35 million tons nationally) and is a major contributor of methane as it decomposes. Food waste is defined as safe, high-quality food that is thrown away for a variety of reasons, including: 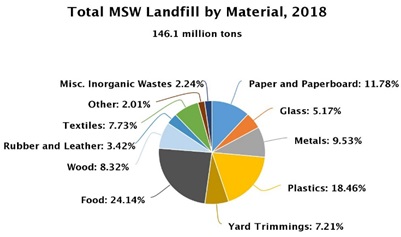 New York City throws out 4,000 tons of food waste per day. Throwing out excessive amounts of food waste like this poses a number of health challenges. Food waste attracts pests like rats, cockroaches, and pigeons, which plague neighborhoods that lack secure disposal options and carry diseases like Leptospirosis, which is easily transmittable to household pets and people and exacerbate existing respiratory illnesses like asthma. Rotting food waste lowers the quality of life in dense urban settings like New York City by contributing foul odors, and gasses that cause skin rashes and asthma. Although the City has made efforts to approach waste through the lens of equity, there are still gaps in this work. An example are zero waste related pilot programs. Often pilot programs like waste containerization or public organic waste drop-offs are in high-income areas of the city who already receive a disproportionate share of environmental health solutions, while leaving neighborhoods like Northern Manhattan behind.

THE SOLUTION
WE ACT for Environmental Justice endorses the New York City Council’s Zero Waste Bill Package and calls for its immediate passage. This bill package will expand access to composting and recycling options for all households in Northern Manhattan, and will set the city on course to achieve zero waste by 2030:

It is crucial to ensure that all zero waste bills are centered on equity and environmental justice. WE ACT strongly believes that frontline communities should be prioritized during the implementation of zero waste policies and programs. Additionally, the DSNY should design a robust outreach plan to engage communities and businesses on how to help get the city to zero waste.