In 1998, WE ACT for Environmental Justice (WE ACT) partnered with New York City Community Board 9 to organize the Harlem-on-the-River Project. Our goal was to engage community leaders and residents in developing a community-driven plan that would both increase access to the Harlem waterfront and raise interest in one of Northern Manhattan’s neglected neighborhoods. Working with more than 200 residents, elected officials, and representatives from the New York City Department of Parks and Recreation, a community vision plan for the waterfront was developed and submitted to the New York City Economic Development Corporation (EDC) by WE ACT in 1999.

In late 2000, EDC scrapped its requests for proposals for commercial development at the site and developed a master plan based on the Harlem-on-the-River community plan. Approval for the final West Harlem Waterfront Park plan came in 2003 and applications for construction were quickly completed. A groundbreaking took place in October 2005, and construction on the park was completed in late 2008. The park was officially opened as the West Harlem Piers Park on May 30, 2009. 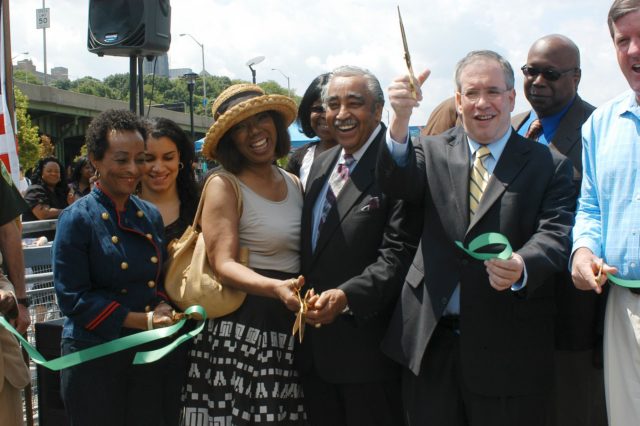 2009: In 2000, WE ACT’s organizing efforts led to the New York City Economic Development Corporation developing a master plan for the neglected Harlem waterfront, based on the community’s vision for more green space and waterfront access. After 9 years of community organizing efforts, on May 30, 2009, the West Harlem Piers Park was officially opened to the public.

Each summer since 2009, WE ACT has hosted the Black & Green Film Festival. We show films that focus on environmental issues impacting low-income communities and communities of color, often preceded by a panel discussion. The park continues to serve as a greenspace for the community as well as an example of how a community can work together to ward off development and reserve a precious slice of the waterfront for public use.