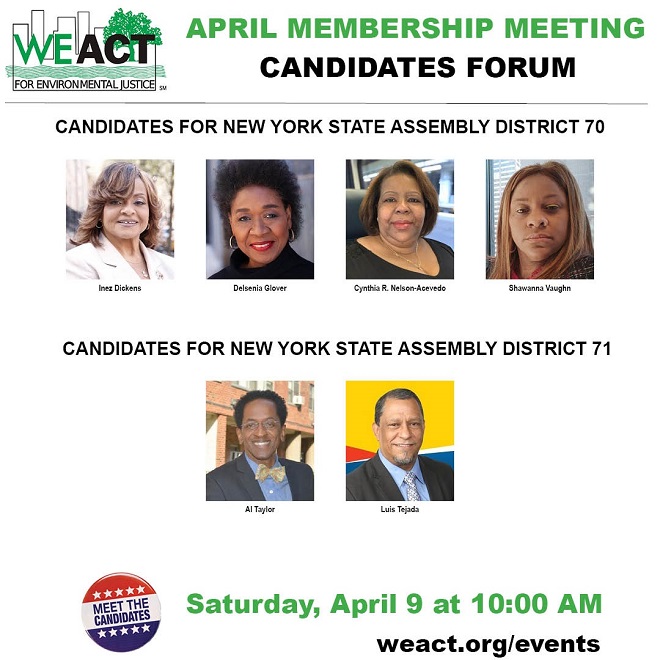 For our April Membership Meeting, we will host a Candidates Forum for New York State Assembly Districts 70 & 71. We’re inviting all of the candidates for these races to attend, introduce themselves, and answer questions from our staff and members about key environmental issues impacting our community. RSVP here.

Tell us about who you are and why you are running for office, including your core values and vision:

Inez E. Dickens – New York State Assembly District 70 Candidate (Democrat)
I am a proud born and raised Harlemite with a life-long passion for empowering and protecting the residents of the Harlem community. This commitment was bred into me at a very early age by my family’s dedication to public service. My father was the well-known Harlem businessman and NYS Assemblyman Lloyd E. Dickens and my uncle, NYS Assemblyman and State Supreme Court Judge Thomas K. Dickens. Steeped in this family legacy of service during my childhood, I would eventually grow into my own as a student activist at New York University and Howard University. During that period, I championed those issues that mattered most to me as a Black woman, a student and a New Yorker.

Over the years, first as a local businesswoman, civic leader and eventually an elected official, I’ve made it my life’s work to preserve as much of Harlem as possible. I’ve been resolute in my drive to make Harlem a place where residents want to live and thrive. I’ve focused on advocating for the voiceless, fighting for the underprivileged, under-resourced and underrepresented.

In 2006, I was elected to the City Council. While there, I became the first Black Woman to be appointed Majority Whip. I used this position to maximize funding to Harlem organizations and projects.

After serving three terms in the Council, I was elected to the NYS Assembly, representing the 70th AD in 2017. In the Assembly, I’ve remained a fierce champion of state government investing in our institutions and infrastructure. My legislative priorities, which are also at the core of my re-election platform, have been creating and preserving affordable housing, increasing public safety and criminal justice reform, fostering economic development for MWBE’s, supporting small business, advocating for LGBTQ rights and supportive services for seniors.

While I haven’t always been the best at tooting my own horn or getting media attention for what I’ve done, I believe I have a long track record of getting things done for Harlem and qualifies me re-election by the people of the 70th AD. Thank you for the opportunity to seek your support.

Delsenia Glover – New York State Assembly District 70 Candidate (Democrat)
I am running for the NYS Assembly District 70 seat, because there needs to be a change in the status quo, and a true focus on the needs of the people in our community, and across the city and state.

I am a community activist and was successful in killing the rezoning of Lenox Terrace in Harlem where I was the president or vice president of the tenant association for more than 12 years.

I have dedicated the last 10 plus years of my life fighting for affordable housing across our state and believe that housing is a human right.  I am a founder of the Upstate Downstate Housing Justice for All coalition, and prior to that was the Campaign Manager for the Alliance for Tenant Power and  the housing justice movement’s primary spokesperson from 2014 through 2019.

I am an anti-racist.  I believe that the wealth takeover of communities of color are an existential threat to our very existence, our power, and our voices as black people including all in the color spectrum, as well as poor and working class white people.

I do view all issues that are troubling our communities through the lens of equity and justice, and structural racism.

I am a social justice warrior, and have a big voice. I believe that it can best be used, at this time in my life, to work toward the principles, through legislation, of the upliftment of all people, through equity and fairness.

Cynthia R Nelson-Acevedo – New York State Assembly District 70 Candidate (Republican)
Who am I?  I’m a woman; I’m a woman of color; I’m the daughter of immigrants; I’m first generation born in the United States of America.  I’m an advocate; I’m a survivor. I was raised in the Roman Catholic Church and have a strong connection with my faith, and I begin and end my day thanking the Lord for all his gifts.

My motivation for change has led to a passion to pursue social justice in my community.  I am a member of a social justice group, and was active in going door to door to distribute information about the 2020 census in Harlem and the greater Manhattan community.  As part of this group, I have also been involved in voter registration drives to encourage voter participation.  My skill in communicating in three languages has enabled me to contribute in very valuable ways to social justice causes within my community. I have also been involved in translating information for anti-violence and anti-racism activities. My passion for change and for social justice has become stronger as I continue to look for new ways to serve my community.

Shawanna E. Vaughn – New York State Assembly District 70 Candidate (Democrat)
My name is Shawanna Vaughn and I’m the mother of two children a 20 year old son and a 9-year-old daughter. I am running because my community deserves healing and restorative practices. I am running because Harlem is unaffordable our healthcare is inadequate the mental health disparities are egregious. For every little girl who was born in prison to a mother addicted to drugs. For every mother who has borne a child in this world that is a black man who is now an endangered species. For every public housing resident who don’t know they can I’m going to show them our voices matter. I’m running because the youth are not the future they are the now and I need them to lead me into what they see for their future as I run for assembly in the 70th District of Harlem.

My platform is mass incarceration foster care and gun violence. Public housing and the plight of Mental health in the biopic community.

Rev. Al Taylor – New York State Assembly District 71 Candidate (Democrat)
My entire adult life has been about service. I am a community organizer, a veteran, a minister, and a public servant. I started out rough and made some mistakes but was given a second chance by a thoughtful judge. Through hard work, determination, and the help of our community, I was able to build up a better life. I work hard every day to give back as good as I got – to build up our communities, educate our young people, and give everyone a fighting chance at a better life. I have always been and will always be a fighter for the little guy.

In office, I have been focused on improving our public schools by reducing class sizes and finally getting the CFE money owed our schools; protecting tenants and affordable housing by standing up for stronger rent laws and repealing the Urstadt law and vacancy decontrol; fixing public transportation, which so many in our community rely on, yet get the worst service on; and giving our children and everyone a second chance and the opportunity to succeed.

Our city is facing multiple crises – climate change, housing, inequality, violence, and the pandemic. I am running to fight for my community and every community across New York that has been marginalized, discriminated against, and forgotten. We need to rise up together and confront these challenges with a bold vision for a better future – a future that is equitable and that centers the needs and experiences of our most vulnerable communities.