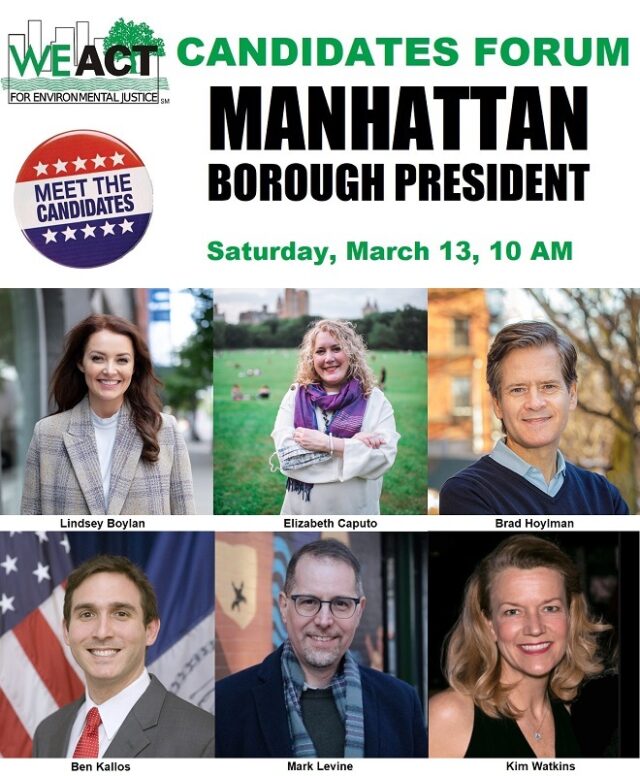 Join us for our March Membership Meeting and get to know the candidates running for Manhattan Borough President!

We’ll start our March Membership Meeting at 10:00 AM ET on Saturday, March 13 by announcing the winners of our Membership Planning Committee election. Then, we have invited all of the Manhattan Borough President candidates to come and tell us why they are the best candidate and how they will tackle environmental racism in our community. Members will also have an opportunity to ask them questions.

Lindsey Boylan is running for Manhattan Borough President because we need bold progressive leadership, radical accountability, and executive experience. The most progressive candidate in the race, Lindsey has spent nearly a decade applying bold progressive ideas to the real problems facing the State of New York and New York City. Lindsey previously served as deputy secretary for Economic Development and Housing for the State of New York, where she oversaw the state’s chief economic development agency. During her time in government, Lindsey secured millions of dollars for underfunded public housing, led the state’s efforts to provide assistance for the people of Puerto Rico after Hurricane Maria, and pushed to enact a $15 minimum wage and Paid Family Leave policy for New Yorkers.

Elizabeth Caputo’s career in Manhattan bridges 25 years of public and private, global and local. She has worked in municipal infrastructure finance, chaired her Manhattan Community Board, run a citywide grassroots civic organization and currently works at an international organization connecting US cities to the world. Elizabeth will be your champion for Manhattan’s future.

Elected to the State Senate in 2012, New York State Senator Brad Hoylman represents New York’s 27th State Senate District, which covers much of lower and midtown Manhattan. He has passed over 100 bills and counting in the Senate, including the Child Victims Act which allows survivors of child sexual abuse to take action, the TRUST Act to allow state officials to access Trump’s New York State tax returns, and the Gender Expression Non Descrimination Act (GENDA) to protect transgender and non binary New Yorkers. Brad is a longtime grassroots activist, serving previously as the three-term chair of Manhattan Community Board 2 and as a former board member of Tenants & Neighbors and Citizen Action. Raised in rural West Virginia, Brad graduated from Oxford University, where he was a Rhodes scholar, and Harvard Law School. Before being elected to the Senate, he practiced law in the private and non-profit sectors. Senator Hoylman and his husband David are the parents of two young daughters, Silvia and Lucy. If elected, Brad would make history as the first LGBTQ Borough President. He’s running for Borough President with a vision to implement a Manhattan Marshall Plan, to help our borough rebuild after the COVID-19 pandemic.

New York City Council Member Ben Kallos was praised by the New York Times for his “fresh ideas” and elected in 2013 to represent the Upper East Side, Midtown East, Roosevelt Island and East Harlem along with all 8.6 million New Yorkers in the New York City Council. He grew up on the Upper East Side with his mother, who still lives in the neighborhood, and his grandparents, who fled anti-Semitism in Europe. As former Vice-Chair of the Jewish Caucus, he has been an ardent advocate for Israel and supporter of Jewish causes. As Chair of the Governmental Operations Committee, during the 2014 to 2017 session, he sought to root out patronage, de-privatize government, eliminate billions in waste, expand elections, and to use technology to improve access to government. As Chair of the Subcommittee on Planning, Dispositions, and Concessions, from 2018 to 2019, he sought to empower communities in the planning process and oversaw the preservation and construction of over 7,000 affordable homes, exposed high subsidies, reformed third party transfer, pushed for minority & women-owned small businesses, fought to root out corruption and for better paying jobs.

City Councilmember Mark Levine is a leading voice in New York City for tenants rights, public health, and equity in our schools, transit, parks, and housing. Mark has twice been elected to represent the 7th Council district–one of the most diverse in New York City–covering West Harlem/Hamilton Heights, Morningside Heights, and parts of the Upper West Side and Washington Heights.

For the last six years, Kim Watkins has fought for public schools. Now she wants to fight for the people of Manhattan. She is running for Manhattan Borough President because New York’s government has failed New Yorkers. It works for the super-rich and the politically connected, but not for the rest of us. For restaurant workers, nurses, teachers, firefighters, sanitation workers, and most public school parents (like her), 2021 is our chance to take a stand. We want change. We demand a local government that serves us.