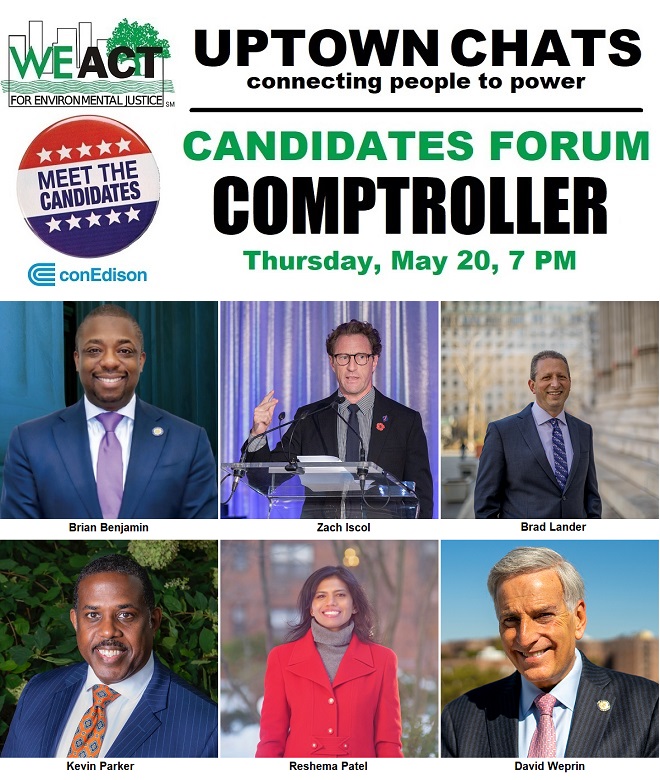 Join us for our next Uptown Chats and get to know the candidates running for New York City Comptroller!

The event will start at 7:00 PM EDT on Thursday, May 20. We have invited all of the candidates running for Comptroller to come and tell us why they are the best candidate and how they will tackle environmental racism in our community. Attendees will also have an opportunity to ask them questions. Take a moment to review their bios below before our forum!

Brian Benjamin was born in Harlem to an immigrant mother who had come to this country with hopes for a better future for her son. Brian has always believed in New York City as a place where anybody can achieve their dreams, and after earning a degree in Public Policy from Brown and a Master’s in Business from Harvard, Brian returned to Harlem to start his career.

Brian has devoted himself to fighting for causes he believes in, and to applying his financial expertise to better his community. That’s why he led the fight to pass the Eric Garner Anti-Chokehold act in the wake of ongoing police violence in minority communities. It’s why he joined a company to develop over one thousand units of affordable housing in New York. And it’s why he is running for Comptroller – to better New Yorkers’ lives by drawing on his unique skillset and life experience.

Brian served as Chair of his Community Board before being elected to represent Harlem and the Upper West Side in the State Senate in 2017. In the Senate, Brian serves as Chair of the Budget and Revenues Committee and has distinguished himself as a leader in criminal justice reform and tenant protections. Brian sponsored a bill to prevent landlords from drastically increasing rent on rent-stabilized apartments, and he successfully fought to divest New York’s public pension funds from for-profit prisons.

With his own parents retired on a pension, Brian knows how critically important the role of Comptroller is. He is ready to apply his passion for making our city a just and affordable place to live and his financial expertise to benefit all New Yorkers.

Brian lives with his wife and daughter in Harlem.

Zach Iscol is a business, non-profit and combat-tested leader who lives in Manhattan with his wife, four children, and three rescue dogs. Zach is the founder of Headstrong, one of the largest and leading providers of mental healthcare in the United States, and served as a Captain in the U.S. Marines Corps during the most contentious moments of the Iraq war.

Brad Lander is a member of the New York City Council, representing the 39th District in Brooklyn. He serves as the Council’s Deputy Leader for Policy, and was a co-founder of the Council’s Progressive Caucus. His hard-hitting policy reports and innovative legislation have helped win protections against unfair firings, combat wage theft for independent contractors, and hold reckless drivers accountable. Brad’s background in community organizing and urban planning informs his work to make government work better for all New Yorkers.

Senator Kevin S. Parker has served in the New York State Senate for 18 years, representing Brooklyn’s diverse 21st Senate District. A lifelong Brooklynite who grew up in the Bushwick Houses, Senator Parker serves as the Majority Whip, the third-ranking member of the Senate. He is Chairman of the Senate Committee on Energy and Telecommunications, and serves on the Finance, Banking, Insurance, and Internet and Technology Committees.  Senator Parker is one of the most accomplished legislators in Albany history, having passed over 70 bills, including 21 in the 2019-20 session.

He is a leading voice nationwide on energy matters, as well as the creator and primary sponsor of Intersolar Summit Northeast, the largest solar energy conference on the East Coast, which gathers experts in the field to discuss real solutions for bringing about a solar energy future. He has a strong background in the financial services arena and gained invaluable experience in the world of finance at UBS PaineWebber where he worked in government affairs of the Chairman’s office and focused on broad issues of importance to the financial service industry. As Project Manager with the New York State Urban Development Corporation, he financed women and minority-owned businesses and promoted community business redevelopment.

Senator Parker has grown up and spent his entire life in Brooklyn and is a product of the New York City Public School system, having attended P.S. 193, Andries Hudde I.S. 240, and Midwood High School. As an experienced educator, Senator Parker has been a professor of both African-American Studies and Political Science at several CUNY and SUNY colleges. He received his Bachelor of Science Degree in Public Service from Penn State and holds a Master of Science Degree from the New School for Social Research in Urban Policy and Management. He is currently pursuing a doctoral degree in Political Science at The Graduate Center, CUNY and is a proud member of the Alpha Chapter of the Pi Eta Honor Society.

Reshma Patel is a candidate for New York City Comptroller. Reshma is a public finance expert with over 18 years of experience, 8 of which were as financial advisor to the NYC Comptroller’s office.

Reshma serves as Vice-Chair of Manhattan Community Board 6 budget committee and serves as President of the Eleanor Roosevelt Democratic Club. Reshma serves as board co-chair of Chhaya Community Development Corporation in Queens advocating for immigrant communities. She is a supporter of the arts and serves on the board of Dance/NYC helping create a more diverse dance ecosystem in NYC. She has spearheaded the creation of a scholarship program for survivors of domestic violence with Sakhi NYC.

Reshma believes democracy only works if everyone participates and civics and financial education are key components to creating equity. She promotes civic engagement as a volunteer with the League of Women Voters NYC and is also a volunteer financial literacy teacher.

Reshma is a graduate of the Massachusetts Institute of Technology and is vice president of programming for the MIT South Asian Alumni Association.

Assemblymember David Weprin is a lifelong New Yorker, born and raised in Queens, the son of a Cuban Jewish immigrant mother and Brooklyn-born father. He has dedicated his life to public service because he believes that throughout everything New Yorkers have been through, it’s about time someone stood up for us. In the City Council and State Assembly, he passed groundbreaking legislation to help seniors, children, and middle-class families. Now, with the City going through the worst financial crisis in history, he is the only candidate running for Comptroller with the relevant finance experience to get us through and emerge stronger than before. David is running to be our next City Comptroller to stand up for working and middle-class New Yorkers, protect pensions and get us back on track.

More about Uptown Chats
Uptown Chats were born out of the idea that Uptown residents need a place to connect to policymakers and leaders about our unique concerns, and that we are powerful when we come together to make change. WE ACT will bring Uptown leaders to network and engage thought leaders and public officials on topics such as energy, economic development, transportation, employment, civic engagement, parks and urban planning, social justice and more.

Want to ask a question, suggest a Speaker, or learn how to become a Sponsor? Please reach out to development@weact.org.

Special thanks to our sponsor ConEdison for their support!