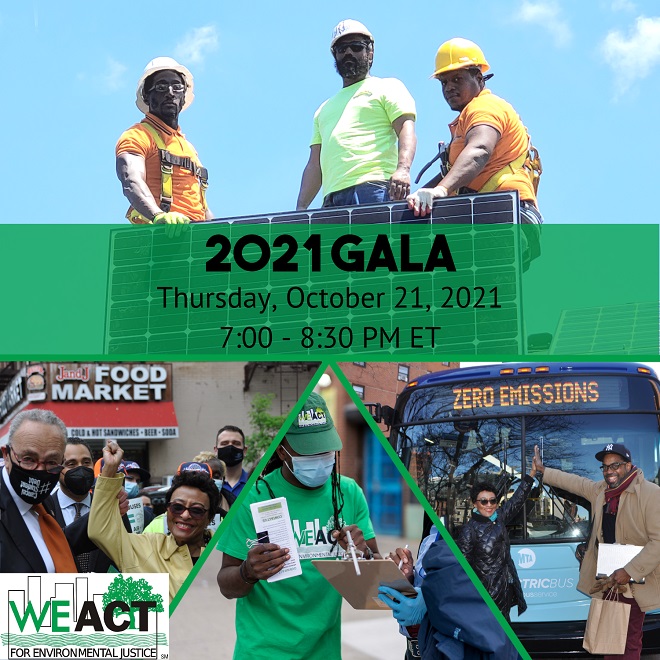 JOIN WE ACT in celebrating this year’s achievements at our annual Gala!

WE ACT’s 2021 Gala will be on Thursday, October 21st from 7:00-8:30 PM EDT via Zoom, with an optional and opt-in only Cocktail Reception at 6:30 PM EDT. You can purchase your tickets here, see our sponsors below, read our Gala Journal below that, and scroll all the way down to read the bios of our honorees. 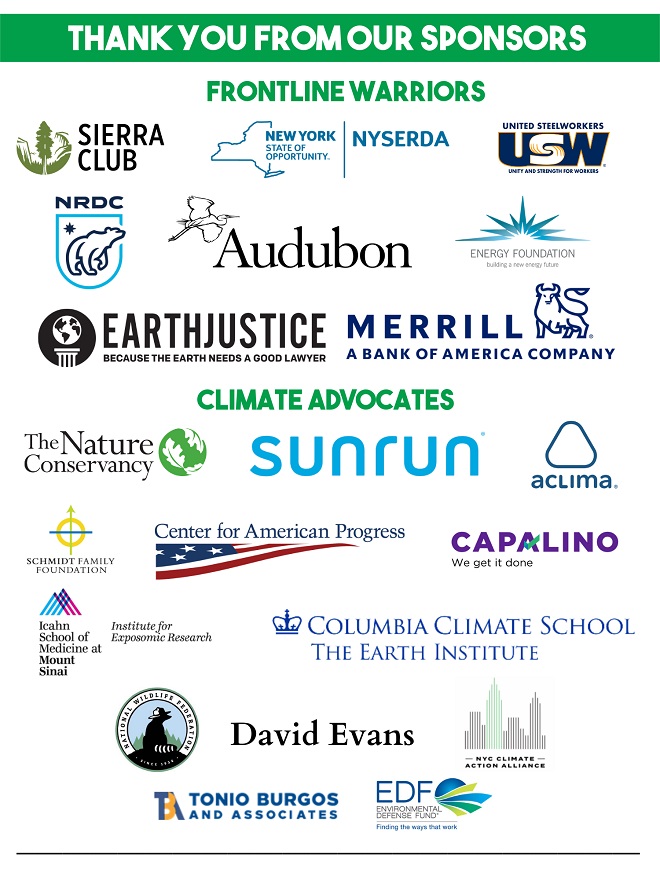 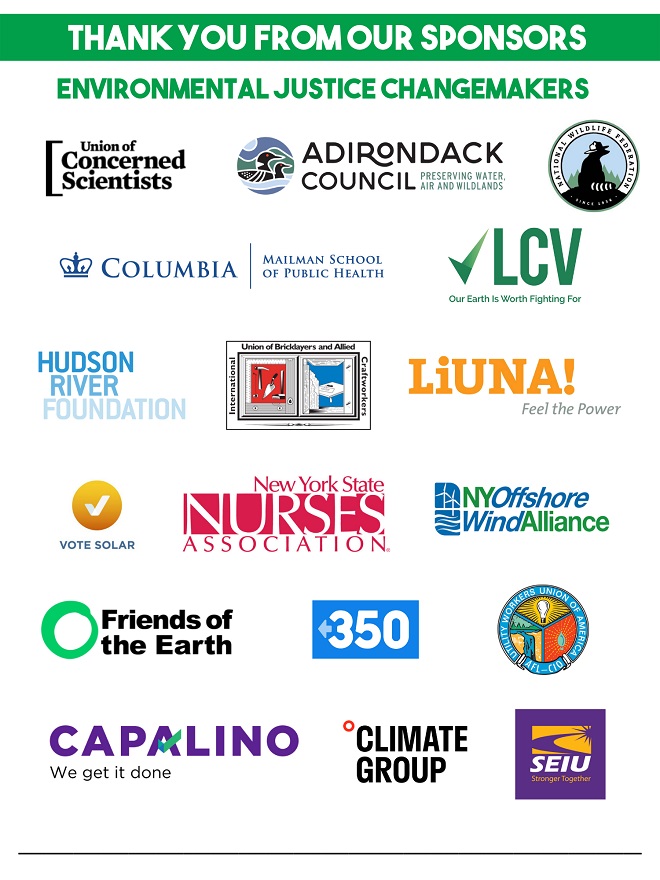 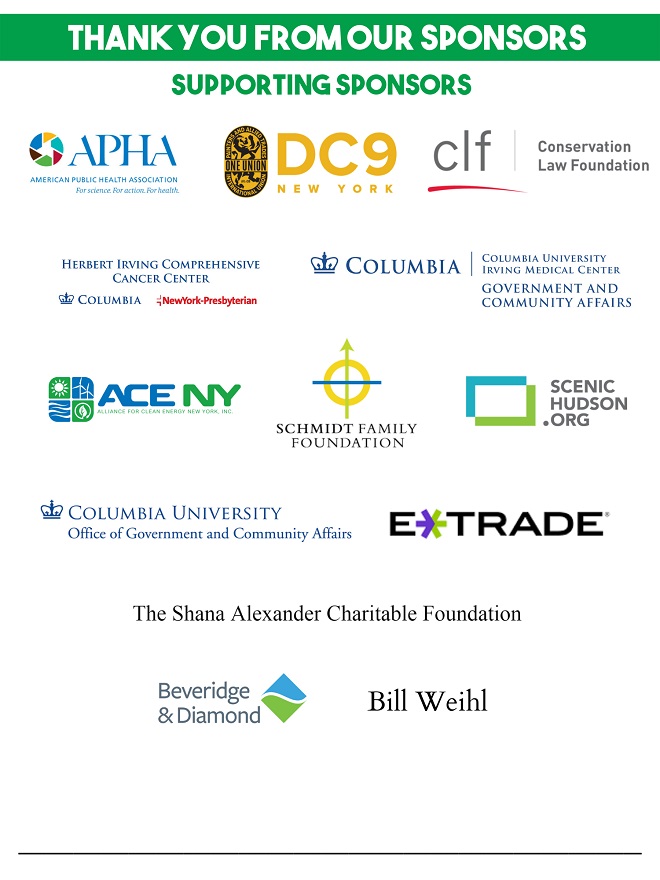 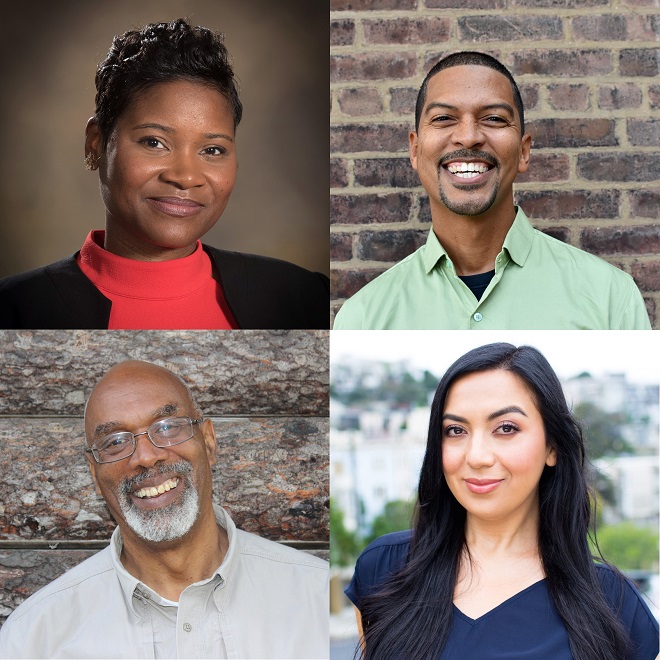 Roxanne Brown, International Vice President at Large, United Steelworkers
Roxanne Brown is the USW’s International Vice President at Large. Brown oversees the union’s public policy and legislative agenda as well as its political work. Throughout her career, Brown has worked with members and allies to advance policies on Capitol Hill and with regulatory agencies to help workers. She has extensive experience in defense procurement policy, environmental regulation and energy policy. Brown has testified at hearings on behalf of USW members at the International Trade Commission (ITC), on Capitol Hill, before state legislatures, and has represented the USW with global policy-makers, including at the U.N. Framework Convention on Climate Change. Brown was a founding Steering Committee member of the BlueGreen Alliance and is a member of the Coalition of Black Trade Unionists. She serves on the boards of the National Endowment for Democracy, Georgetown University’s Institute of International Economic Law and the Bipartisan Policy Center’s Direct Air Capture Advisory Council.

Omar Freilla is a serial trailblazer, social entrepreneur, and movement builder with a passion for building structures for community self-determination and regenerative economies. His work is grounded in his experience growing up in the South Bronx, a child of Dominican immigrants, raised by his mother and a network of community organizers. He founded Green Worker Cooperatives, the oldest Black-led worker cooperative development organization in the US. He has pioneered multiple approaches to cooperative development that have resulted in New York City now having the largest concentration of worker cooperatives in the US. He is the creator of the Co-op Academy, the first business accelerator for worker cooperatives in the US. And he is now preparing to launch Diaspora Cooperatives, a new global initiative aimed at the development of cooperatives throughout the African diaspora.

Omar has over 18 years of experience developing worker cooperatives and almost as many years as an organizer challenging environmental racism, classism, and sexism. He has been part of the leadership of the New York City Environmental Justice Alliance; Sustainable South Bronx; US Federation of Worker Cooperatives; Democracy At Work Institute; NYC Network of Worker Cooperatives; and the Story of Stuff Project. He currently serves on the Mayor of New York City’s Environmental Justice Advisory Board and New York State’s Just Transition Working Group.

Davida Herzl, CEO and Founder, Aclima Inc.
Davida Herzl is co-founder and CEO of Aclima, where she leads a diverse team building a new class of tools to accelerate climate action, protect public health, and advance environmental justice. Under Herzl’s leadership, Aclima has pioneered block-by-block measurement and analysis of air pollution and greenhouse gases at scales never before possible. The Aclima managed sensor network and software platform translates billions of scientific measurements into environmental intelligence that supports decision-making by governments, communities, and businesses working to reduce emissions for global impact. To advance Aclima’s mission, Davida applies a systems-based approach to creating new technologies and powerful partnerships that deliver transformative business, environmental and societal value. The company was recently recognized as one of the 50 Most Innovative Companies in the World by Fast Company and #1 in Data Science. She has raised over $80M in venture financing from leading mission-driven investors, a rarity in Silicon Valley as a Public Benefit Corporation. She holds a JD from the University of San Diego School of Law, and a BA in Economics, Political Science, and Communications from the University of California, San Diego. Davida has received industry accolades for her work, named one of the Top 100 Most Creative People in Business by FastCompany (2019), one of the 100 Most Intriguing Entrepreneurs of 2018 by Goldman Sachs, and a Grist 50 Fixer (2018).

Aaron Mair, Director, Adirondack Wilderness Water and Jobs Coalition, Adirondack Council
Aaron Mair is a retired New York State Department of Health epidemiological-spatial analyst, Environmental Justice pioneer, and was the 57th president of the nation’s oldest and largest environmental organization, the Sierra Club. As an advocate for environmental justice and activist in the Arbor Hill, NY community, he was responsible for the creation of the W. Haywood Burns Environmental Education Center and the Arbor Hill Environmental Justice Corporation. He lives in Schenectady, New York. He is a graduate of and holds an honorary Doctor of Humane Letters from the Binghamton University. Mair also trained at Rhode Island’s Naval Education and Training Center and attended the American University in Cairo.

S.U.N.S. was initially incubated by WE ACT for Environmental Justice. In 2016, WE ACT in partnership with several other local organizations launched Solar Uptown Now, a campaign to bring solar energy to affordable housing in Northern Manhattan. As of March 2020, the program has installed solar panels on the roofs of 11 HDFC buildings in Northern Manhattan, annually producing 415 kW of renewable energy while avoiding 802 pounds of nitrogen oxide, a leading source air of pollution and a contributor to global warming. By offsetting the electricity needed for the common areas of these buildings, the program saved residents an estimated $61.7 thousand in the first year and an estimated $1.9 million over the 25-year lifetime of the installations.

In 2019, 10 graduates of WE ACT’s Worker Training program, all trained in solar installation and NABCEP certified, came together to form the Solar Uptown Now Services cooperative under the guidance of WE ACT Senior Community Organizer Charles Callaway and with the support of Green Worker Cooperatives’ Co-Op Academy training in the Bronx. Nationally, the solar industry is only 7.6% Black and 16.9 % hHispanic. S.U.N.S. is the first minority owned solar workers cooperative in the NYC area. S.U.N.S. continues to work with WE ACT as a partner in shared commitment to working towards energy justice. 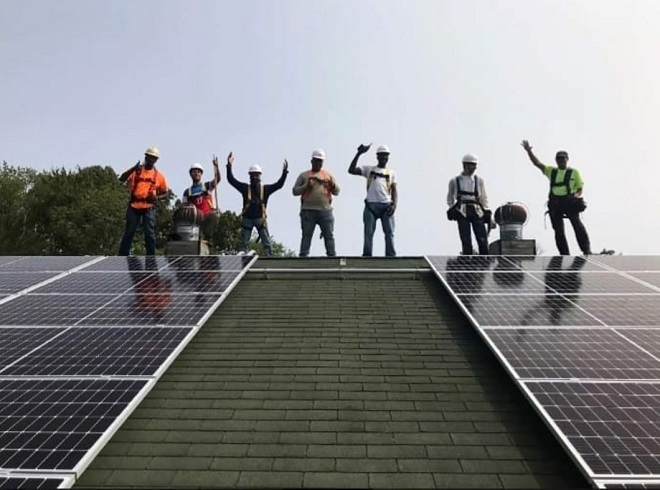