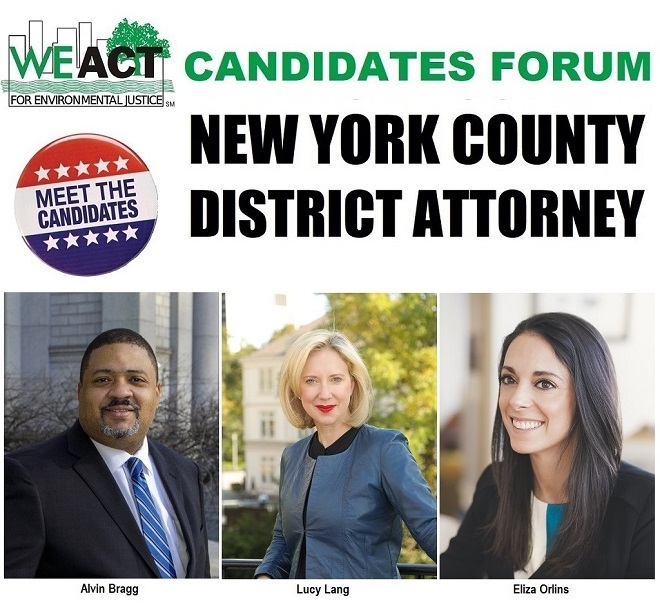 THE DISTRICT ATTORNEY is its county’s chief law enforcement officer, overseeing all prosecutions in the county. The DA’s duties typically involve deciding whether to bring criminal charges against people who have been arrested, reviewing possibilities to offer a plea agreement, reviewing police reports, as well the prosecution of felonies, misdemeanors, violations and traffic infractions.  The District Attorney is responsible for their agency by prosecuting their most important cases and leading a staff of prosecutors.

A son of Central Harlem, now raising two children there, Alvin Bragg was repeatedly stopped and frisked by the NYPD as a teenager, including three times at gunpoint. His life has been about the fight for justice, standing up to the powerful, and demanding that all people be treated equally before the law.

He is the one candidate with the management experience needed to bring culture change to transform the office, the case making experience to lead important white collar cases and big structural cases that makes us safer, and the lived experience growing up in an impacted community to understand the inequities and injustices baked into our criminal justice system.

From day one, Alvin Bragg will bring long overdue, fundamental reform to the way this critical office approaches criminal justice. He will make the office the progressive leader it should be on criminal justice reform. One that makes us safer by refusing to criminalize poverty, ends racial disparities, demands justice for the brave survivors of sexual assault, makes incarceration a measure of last resort, brings new funding and focus to reentry programs, creates a civil rights unit to handle investigations of police misconduct, and refuses to take campaign donations from any lawyer who appears before the office.

Alvin served as a civil rights lawyer, fought corruption with Preet Bharara in the US Attorney’s office, and was the Chief Deputy Attorney General of New York State, overseeing 1,200 people and some of the office’s biggest cases – including prevailing against the Trump administration over the census and successfully suing Trump and the Trump Foundation.  Alvin shined a light on the City’s unjust stop and frisk policies, helped workers recover stolen wages, and held accountable landlords who unlawfully harassed tenants out of their homes.

Throughout his career, Alvin has fought for police accountability, suing police officers for excessive force, convicting an FBI agent for lying, prosecuting a sitting District Attorney for his handling of an investigation of a police shooting of an unarmed person, and now representing the family of Eric Garner in a case against the mayor seeking key details about Mr. Garner’s death.

Lucy Lang most recently served as Director of the Institute for Innovation in Prosecution at John Jay College of Criminal Justice, a national criminal justice reform non-profit. Lucy previously served as an Assistant District Attorney in Manhattan, where she investigated and prosecuted homicides, domestic violence and gun crimes and served as Special Counsel for Policy and Projects, creating a college-in-prison course to develop innovative criminal justice policy. She has spent the past three years teaching that class in NY State prisons. Lucy is a graduate of Swarthmore College, where she serves on the Board of Managers, and Columbia Law School, where she was the Editor-in-Chief of the Journal of Gender and Law and later served as a Lecturer-in-Law. Lucy was named a 2015 Rising Star by the New York Law Journal, was a 2017 Presidential Leadership Scholar, was a 2019 Aspen Society Fellow, and is currently Vice Chair of the American Bar Association Criminal Justice Section, a member of the NY State Bar Association Task Force on Racial Injustice and Police Reform, a member of the Prison Art + Aesthetics Project, a member of the Council on Criminal Justice, and a Term Member of the Council on Foreign Relations. She has published on criminal justice issues in the New York Times, The Washington Post, The Atlantic, the New York Daily News, and many others, and is a mother of two and the author of March On! a children’s book about the 1915 women’s march, celebrating this summer’s centennial of women’s suffrage.

Eliza Orlins is a Manhattan public defender — the only public defender running for District Attorney. She is an outspoken advocate for our city’s most vulnerable. For nearly a dozen years, she has fought courtroom battles representing over 3,000 New Yorkers who otherwise would not have been able to afford a lawyer. Every day, she sees firsthand how Manhattan’s criminal legal system functions one way for the rich and connected, and another way for everyone else. Eliza has earned a reputation as a relentless champion for the underdog. She has taken on the toughest of fights for the very people our system is most rigged against, including our Black and Brown neighbors and those in lower-income communities. In 2020, Eliza announced her candidacy for Manhattan District Attorney, running on a platform designed to take on the inequities in our system — transforming the criminal legal system in New York in order to make our city safer for everyone.