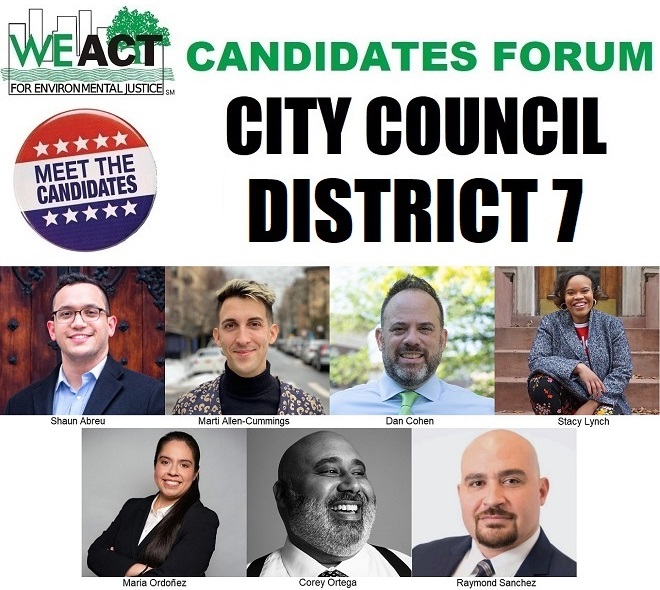 Shaun Abreu has spent years advocating for our community, defending tenants’ rights, and fighting for working families. Born in City  Council District 7 to immigrant parents from the Dominican Republic, Shaun was raised in Washington Heights and attended public schools there and in Manhattan Valley, where he currently resides.

A firm believer in housing justice, Shaun works as a tenants’ rights attorney at the New York Legal Assistance Group, defending low-income New Yorkers from eviction and helping dozens of families remain in their homes. Like many of his clients, Shaun was raised on public assistance and in elementary school, witnessed his family being evicted. This experience fuels his commitment towards securing housing justice for working families, which he will continue to fight for in the City Council.

Shaun was a vital member of Manhattan Community Board 9, a board director for Friends of Morningside Park, and a court-appointed special advocate for children in foster care. As the Deputy Campaign Manager for Council Member Mark Levine, Shaun spearheaded this victorious race in 2013 and contributed to the successful passage of the Right to Counsel bill, guaranteeing that low-income New Yorkers have access to free attorneys in housing court. During law school, Shaun interned for the Honorable Ronaldo T. Acosta, the Presiding Judge of the Appellate Division for the First Judicial Department, as well as the Natural Resources Defense Council, where he contributed to a successful petition directing New York State to reduce pollutants from our city’s drinking water.

Marti Allen-Cummings (they/them) is an activist, community board member, gig worker and drag artist running for City Council in Uptown Manhattan. Marti has been working in NYC for 13 years after moving to the city to pursue a performing arts career. They know what it’s like to make it in New York living paycheck to paycheck and without insurance. For over a decade, Marti has been deeply involved in the community – advocating for LGBTQIA+ young people through the Ali Forney Center and aiding New Yorkers experiencing homelessness.

During the 2016 election Cycle, Marti founded a progressive Democratic club and their political activism energized an entire community. Marti currently serves on Community Board 9 on the Senior Issues Committee, and is an advisor on the NYC Nightlife Advisory Board. Marti lives with their husband, Blake, and two dogs on 143rd Street.

Dan Cohen is a native New Yorker with deep roots in the community, an affordable housing advocate, a proud NYC public-school graduate as well as current public-school parent, and serves on the school PTA. Since 2014 Dan has worked at the nonprofit Housing Partnership, helping to preserve thousands of affordable housing units each year. Dan is the Democratic State Committeeman representing the 69th Assembly District since being first elected in 2010 and also a founder of the Progressive Caucus of the NYS Democratic Committee. He is involved in the community as a member of Community Board 9, working to create 1,000 new affordable units, limit luxury real estate development, protect local landmarks and preserve our parks. Dan is also the President of the Valley Restoration LDC, a founder of Friends of Anibal Aviles Playground/Amigos del Parque de Anibal Aviles and on the board of Friends of Morningside Park. He was born and raised in rent-regulated housing in Upper Manhattan in the same neighborhood where he lives with his wife and son today. You can learn more about Dan at www.Cohen2021.com.

Stacy Lynch is a daughter of Harlem and a woman who was born into the movement that has dedicated her life to serving her community. She’s known for her ability to build coalitions whose work brings forth change in communities of great need. Most recently, she served as the Deputy Director of Intergovernmental Affairs at the NYC Mayor’s Office where she spent her days responding to community crises across the City and developing response plans designed to ensure the community needs were met and residents’ quality of life remained whole.

Stacy launched her run for NYC Council in the 7th District because she’s seen firsthand how government can play an active role in everyday people’s lives. As she stands on the cusp of leading District 7 to recovery following the COVID-19 pandemic, Stacy couldn’t be more prepared for this task, nor more energized to continue her life of service. Stacy is a dedicated caretaker to her mother Mary; a little sister to her brother Bill Lynch lll, a doting aunt to her nephew Bill Lynch llll, and a loving mom to her dog Bear.

Maria Ordoñez is an organizer and working-class Latina running for City Council in District 7. Maria is a lifelong West Harlem resident and has seen working class communities of color like hers go ignored by our elected officials for far too long. She firsthand understands what it means to go through New York City’s public school system and the hardships of living in an underserved community of color. That’s why she is running to represent us on the City Council. We have a huge affordable housing crisis, displaced communities, and people are suffering from lack of access to food and quality healthcare. Politicians have forgotten our communities, rich people continue to get rich, and working class people continue to struggle to survive. We need true representation and someone who will fight so that everyone has the right to food, healthcare, a good home, an education, and a good job. Maria will bring the voices of Council District 7 to City Hall and fight for a more just and equitable society for everyone. Maria is building a movement for District 7 and has the support of Our Revolution, PSC-CUNY, the New York Progressive Action Network, Grassroots Action NY, and The Jewish Vote.

A lifelong resident of West Harlem, Corey Ortega is a son of Dominican immigrants and the proud product of a union household. (His mom was a member of the UFT, and his dad was a member of Carpenters Union Local 608).

An experienced community organizer, Corey works as District Leader to fight for a fairer, stronger city for all New Yorkers. Corey is running for City Council on a platform of addressing the crisis of affordable housing, ending police abuse, expanding civil right to counsel, protecting LGBTQ+ rights, fighting for Medicare for all, building emergency and transitional housing for homeless LGBTQ+ youth, and fighting for educational equity.

Corey’s passion for public service started on the block where he grew up. When he was in college at St. John’s University, where he worked with his mother, a retired public school teacher, to found a group family daycare. He also fought for the rights of daycare providers on the executive board of UFT’s Child Care Providers Chapter. After graduation, he worked as a tenants’ rights advocate at P.A.L.A.N.T.E. Harlem, helping to improve the living conditions of Harlem residents in rent-stabilized and federally-subsidized buildings.

Corey also served as a Special Assistant for New York State Assembly Member Keith L.T. Wright, where for 3 years he served the Harlem community. From fighting eviction proceedings, to working with vendors on a proposal to create a vendor district on 125th Street and helping small business owners get back on their feet, he found equitable solutions for the residents of the district.

Corey has brought his skills as an organizer and knowledge of affordable housing to serve the veteran community. As Director of Civic Leadership at the NYC Veterans Alliance, he recruited and trained veterans to run for office. He also helped organize veterans to pass NYC Human Rights Local Law 119, which protects veterans and service members from discrimination in housing, employment, and public accommodations.

Corey is a staunch ally of the LGBTQ+ community. He has worked on LGBTQ+ voter registration drives, fought for the CASTRO bar/lounge and other LGBTQ+ businesses of color, and has been vocal in protesting against Trump’s recent healthcare rule that erases transgender protections.

Corey is a progressive Democrat who’s leading efforts to bring new voices into government and the political process. In 2017, he ousted an entrenched incumbent to become the first Dominican American District Leader in the 70th Assembly District (Part D). From founding one of the most diverse Democratic clubs in Northern Manhattan, to amplifying the voices of Black, Latinx, and Asian New York City Council Members, to partnering with his neighbors and grassroots organizations to help defeat the IDC, Corey is committed to building an inclusive, progressive Democratic Party that looks like our neighborhood.

He lives with his wife, Danielle, in the same rent-stabilized apartment in the Manhattanville neighborhood he grew up in.

Raymond Sanchez is a lifelong Manhattanite.

Ray was born and raised in the Baruch Houses, a New York City Housing Authority complex. Ray’s mother came from Central America as a young adult, eager to work and build a better life.

Growing up as a City kid in the 1980s had real challenges. Rainbows of crack vials littered NYCHA staircases, residents were threatened by gang violence, and the AIDS epidemic hit the city’s poorest zip codes the hardest. Ray’s mother feared she might lose her son to the dangers of the streets, so she enrolled him in the Boys Club of New York (BCNY) for structured after-school activities.

The BCNY selected Ray for its scholarship program, and at age 11, he enrolled in boarding school in Connecticut.

Ray knew that there were plenty of Black and Latina/o/x kids back home who would thrive if they had access to the same resources enjoyed by more privileged groups. It’s a fundamental reason why he has always sought to invest in communities of need, like the NYCHA houses he grew up in. It’s also why he is incredibly proud to have worked on passing the New York City Living Wage Law in 2011 and to have served as the lead author on an application that won a $10 million Downtown Revitalization Initiative Award for the South Bronx.

Ray went on to receive his BA from Wesleyan University, majoring in government with departmental honors for his thesis work on Latino political incorporation in New York City. He took his enthusiasm for civic engagement from academia to his first job as staff for the historic 2001 mayoral campaign of then Bronx Borough President Fernando Ferrer, whose central theme was a “Tale of Two Cities.”

After the campaign, Ray moved on to work for the Hispanic Federation, which was a natural progression after the campaign. Ray greatly enjoyed his time there, working on behalf of the Latino community; this experience has informed his years of service with various non-profits.

It also made his five years as a pension trustee to the New York City Retirement System that much more rewarding. Ray leveraged his corporate experience in financial services to oversee investments and corporate governance. He also worked with his fellow labor trustees to divest from predatory hedge funds that were exploiting Puerto Rico’s debt.