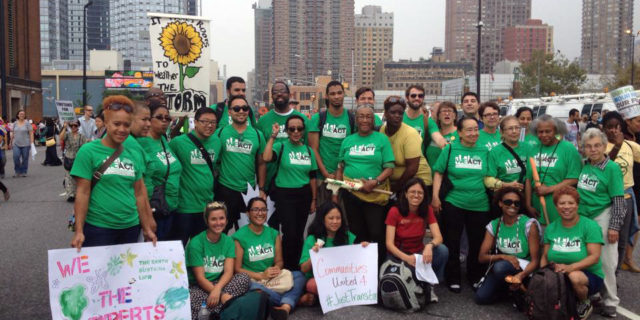 Climate justice – recognition of climate change’s disproportionate impacts on historically marginalized communities, who benefit the least from fossil fuels consumption both locally and around the world. Climate justice work aims to level these impacts and foster comprehensive solutions outlined by affected groups.

Social cohesion – the measure by which a society fosters social inclusion and mobility, and resists marginalization of any members. A society with strong social cohesion is collectively more capable of adapting to changing social and environmental conditions.

Sustainable development – economic development with concerns for equitable distribution of benefits among people both presently and intergenerationally.

Environmental resiliency – the ability of ecosystems to respond to periodic disruptions and adapt to gradual change.

Social justice – equal access to liberties, opportunities, and rights for all people in a society; protection and support for its members according to need; and celebration of diversity among its members.

Socio-economic inequality – uneven distribution of resources and wealth among different groups in a society. This is tied to histories of mitigated access including redlining, discriminatory hiring practices, and unfairly written laws

Microgrids – local energy sources which distribute energy. They are connected to the central grid, but can operate and distribute energy independently from it. Microgrids have own power resources, generations and loads and can be used as a back –up option in case of blackouts.

Electrical Cooperative – a cooperative owned by community members which distributes electricity to the respective community. In case the cooperative makes margin profit, the amount is reinvested for infrastructure maintenance or renovation; in some cases even dividenda is shared among the members.

Floodplain –  a flat area which is close to a river or other water stream and is under risked of being flooded during heavy rain falls.

Food sovereignty – idea/mission which strives for people to have full engagement and control over the food production chain (planting, gardening, collecting and distributing) in order to promote and protect people’s right to healthy wood and healthy environment.

Community Solar – a solar–electric system which is shared by several members of a respective community, installed on a collective residential building.

Green Infrastructure – process of preserving the ecosystems by increasing the amount and number of greenery in a respective area. Most usually, the green infrastructure is related to treating and managing storm water by installing environmental features, usually trees and plants. Green roof tops and reed beds are some of the examples for green infrastructure. They absorb the storm water and positively affect the capacity of the sewage collection system during heavy rain falls.

Energy Efficiency – managing and restraining the consumption of energy. It can be achieved by installing energy efficiency measures such as outer wall insulation or by using energy efficient home appliances labeled with “energy star”.

Urban Heat Island – a metropolitan area which is way warmer compared to the rest of the areas in the city or to the rural regions. The local heat is produced due to the concentration of buildings, cars, streets and people as well as a result of lack of greenery.

HDFC Coops – it stands for Housing Development Fund Corporation cooperatives. This is NYC’s affordable housing measure by which renters or buyers receive tax breaks and subsidies under specific rules and conditions mainly focusing on their income and financial capability.

500-year floodplain – The geographical area with a 0.2 percent chance of flooding in any given year \

Combined Sewer Overflow – In periods of rainfall or snowmelt, total wastewater flows can exceed the capacity of the sewer collection systems and/or treatment facilities. When this occurs, the combined sewer system is designed to overflowdirectly to nearby streams, lakes, and harbors, discharging untreated sewage and stormwater.

Combined Heat and Power – Trigeneration or combined cooling, heat and power(CCHP) refers to the simultaneous generation of electricity and useful heating and cooling from the combustion of a fuel or a solar heat collector. Cogeneration is a thermodynamically efficient use of fuel.

Composting– A mixture of decayed or decaying organic matter used to fertilize soil. Compost is usually made by gathering plant material, such as leaves, grass clippings, and vegetable peels, into a pile or bin and letting it decompose as a result of the action of aerobic bacteria, fungi, and other organisms.

Energy Poverty – lack of meeting the daily basic needs such as cooking, heating or/and personal hygiene as a result to limited access to energy. It also stands for phenomena in which people as a result of sufficient income, use dirty or polluting fuels.

Green Economy – it is an economy does not cause any consequences to the environment and the nature, but at the same time is sustainable and produces growth and employment prospects;

Climate Change Adaptation – a process of adapting of ecosystem to the new circumstances caused by the climate changes and implementing activities for limiting the future effects;

Climate Change Mitigation – process of reducing the impact of the climate change (in focus – limiting the level of green gas emissions) by various tools such as installing new eco friendly technologies, raising awareness among citizens for rational use of energy or via green urban planning.

Base Load –The minimum continuous load over a given period of time. Base load generating stations operate essentially at full output whenever possible.

Capacity – In the electric power industry, capacity has two meanings:

Cogeneration – The simultaneous production of power and thermal energy. Such systems have great potential in industry, where a significant requirement for electricity is coupled with a large demand for process steam

Demand Response (DR)-  Demand Response is a resource for controlling electricity consumption at times of peak demand. Consumers reduce or shift their electricity usage during peak periods in response to price signals and financial incentives.

Direct Current (DC)- Current that flows continuously in the same direction (as opposed to alternating current). The current supplied from a battery is direct current

Electrical Energy- The quantity of electricity delivered over a period of time. The commonly used unit of electrical energy is the kilowatt-hour (kWh).

Electrical Power –The rate of delivery of electrical energy and the most frequently used measure of capacity. The basic unit is the kilowatt (kW).

Energy Efficiency (EE)- Energy efficiency, or efficient energy use, is a way of managing and restraining growth in energy consumption. Its goal is to reduce and/or maximize the amount of energy required to deliver services.

Hertz (Hz) The unit of frequency for alternating current. Formerly called cycles per second. The standard frequency for power supply in North America is 60 Hz.

Grid A network of electric power lines and connections.

Kilowatt hour (kWh) The commercial unit of electric energy; 1000 watt hours. A kilowatt hour can best be visualized as the amount of electricity consumed by ten 100-watt light bulbs burning for an hour. One kilowatt hour is equal to 3.6 million joules.

Load The total amount of electricity required to meet customer demand at any moment. The load equation fluctuates depending on electricity use throughout any given day.

Transmission The process of transporting electric energy in bulk on high voltage lines from the generating facility to the local distribution company for delivery to retail customers.