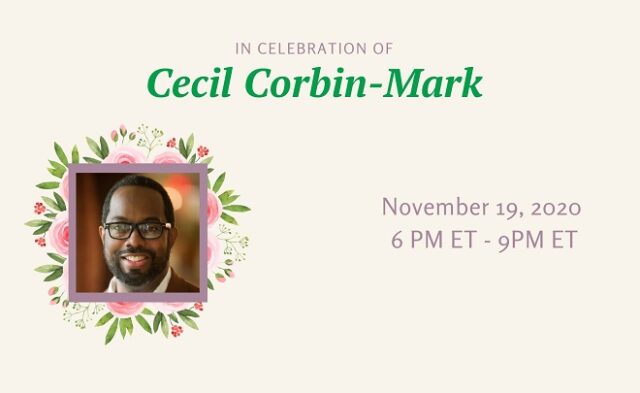 It is with tremendous grief and sadness that we share the loss of our friend and colleague Cecil Corbin-Mark, the Deputy Director and Director of Policy Initiatives at WE ACT for Environmental Justice. Having suffered a stroke, Cecil was hospitalized in critical condition until the evening of October 15, when he passed on with his family by his side.

Our thoughts and prayers are with Cecil and his family. He is survived by his Mother Winnifred Corbin, his second Mother Merlyn Corbin, his father Luces Mark, his Godson Nigel Holder, and other family members. We will share information regarding the memorial and funeral services as they become available.

It cannot be overstated what a painful loss this is to both WE ACT and the environmental justice movement. He joined our organization in its infancy, and over the next 26 years grew to become one of the most recognized and respected leaders in the movement. His leadership and advocacy improved the lives of hundreds of thousands of people, not just in Harlem but all across the country.

We ask that you all take a moment and reflect on the magnificent life of Cecil Corbin-Mark. Celebrate the individual, and his body of work. The bills passed, and the people mentored. Remember his laughter, and his smile. And then follow in his footsteps, fearlessly fighting to protect and uplift the health and well-being of frontline communities. Honor his memory by continuing to battle environmental racism and champion health and justice for all.

Cecil Corbin-Mark, a well-known and highly-respected leader in the environmental justice movement, passed away on October 15, 2020 at the age of 51. He was a life-long resident of Hamilton Heights in Harlem, New York, where his family has lived for the last six decades. It is a community he dedicated his life to, serving as the Deputy Director and Director of Policy Initiatives at WE ACT for Environmental Justice, a membership-based nonprofit he joined as the volunteer group hired him as its first paid staff member in 1994. In this capacity, Cecil helped develop and pass numerous bills in New York City and New York State, and managed WE ACT’s Washington, DC federal policy office. He advanced the work – especially on energy and toxics – of this Northern Manhattan-based organization whose mission is to build healthy communities by ensuring that people of color and/or low-income residents participate meaningfully in the creation of sound and fair environmental health and protection policies and practices.

A political science major at his beloved Hunter College, C.U.N.Y., Cecil always had a passion for local, national, and international politics. His graduate degree in political science at Oxford University in the United Kingdom focused on radical political traditions of Africans of the Diasporas in the Americas. He lectured on the environment and environmental justice at Hunter College, Teacher’s College, The College of Mount St. Vincent, Buffalo State, Cornell University, Yale School of Forestry, and Columbia University School of Public Health.

A pilot and a skydiver, Cecil had just taken up sailing. He also devoted time to mentoring young people and worked with the Friends of Island Academy, a program to assist formerly incarcerated teens. And he had financed and ran several summer basketball teams for neighborhood youth.

He is mourned by his WE ACT team and hundreds of environmental and justice advocates nationwide for his leadership, technical assistance, and camaraderie.

He is survived by his Mother Winnifred Corbin, his second Mother Merlyn Corbin, his father Luces Mark, his Godson Nigel Holder, and other family members.